Featured: The Lost Mine Trail by JJ Rusz 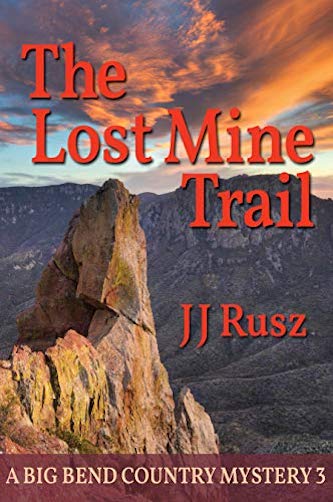 A new whodunit from the mind and imagination of JJ Rusz. His writing captures the lonely and defiant spirit of the Big Bend.

“It’s a dangerous little county you got here, Sheriff.”

Two brutal crimes a hundred miles apart, one the murder of a controversial singer in a small West Texas town and the other an assault on two journalists in nearby Big Bend National Park.

Once again, it’s up to Sheriff Clayton Shoot and Professor Claire Harp to pluck out the heart of this Big Bend Country mystery—third in the series that began with The Window Trail.

JJ RUSZ is the author of the Big Bend Country Mysteries–focusing on crime and intrigue in Far West Texas. (jjrbigbend.com). The first book in the series THE WINDOW TRAIL (2018) was named Texas Authors 2019 Best Mystery/Thriller.

A second book, entitled THE SOUTH RIM TRAIL followed in summer 2019. Favorite characters from THE WINDOW TRAIL reappear, while intriguing new ones join the cast. The action occurs in Big Bend National Park, both on its magnificent South Rim loop trail (12.5 miles up and through the Chisos Mountains) and on the Old Maverick Road.

THE LOST MINE TRAIL, the third book in the series, appeared in December 2020. Its action occurs both in the town of Alpine at an annual cowboy poetry gathering and on the celebrated Lost MineTrail in Big Bend.

The series is character-driven, with just enough romance and humor to make life in the rugged desert region agreeable.

J J Rusz is the pen name for John J Ruszkiewicz, currently a resident of Far West Texas who was born in Cleveland, Ohio, earned a BA from St. Vincent College (1972), and a PhD in English from The Ohio State University (1977).

Before writing the Big Bend Country Mysteries, he wrote or co-authored a range of college textbooks, including Everything’s an Argument How to Write Anything, and A Reader’s Guide to College Writing. In 2017, he retired from the University of Texas at Austin, where he taught literature, rhetoric, and writing for 40 years.

He currently spends most of his time in Alpine, Texas, enjoying its proximity to Big Bend National Park and lots of open space.

I have wandered the Big Bend country for a long time. It is a national park that sprawls for 789,000 acres across a curious desert where the mischievous Rio Grande makes its sweeping curve around the Mexican border of West Texas.

The landscape has not changed much with the relentless passing of years, although a rustic but comfortable lodge and stone cottages now occupy the Chisos Basin, and campsites cluster around the general store at Hot Springs.

The basin nestles at the foot of Casa Grande, perhaps the most famous and familiar landmark in the park, appearing very much like a calmed volcano crater where ponderosa pine, juniper, and Douglas fir shoot upward instead of the fiery geysers that once spit lava into the valley of Panther pass.

You have to be deliberately going to Big Bend to get there. Marathon lies 80 miles to the north, and the lonely road to Alpine winds its way across the foothills of the Great Chihuahuan Desert for more than 120 miles.

The roadway traverses a terrain of volcanic rock, sliced by dry, baked arroyos and faraway canyons.

Just as captivating is Lost Mine Trail, a new whodunit from the mind and imagination of JJ Rusz. His writing captures the lonely and defiant spirit of the Big Bend.

The land is a place of mysteries, and the battles Sheriff Clayton Shoot and Professor Clair Harp face while working to solve a series of brutal murders are daunting and sometimes chilling. The crime scene is vast and only a lawman with grit and resolve would dare tackle it.

The characters are well-drawn, the writing is crisp, and the setting is unforgettable. Follow Sheriff Clayton Shoot across the mountains and up the narrow, rocky trail to Lost Mine Peak. It is a trip you will remember for a long time.

Please click HERE to find The Lost Mine Trail on Amazon,