Featured: The Invitation by Rachel Abbott 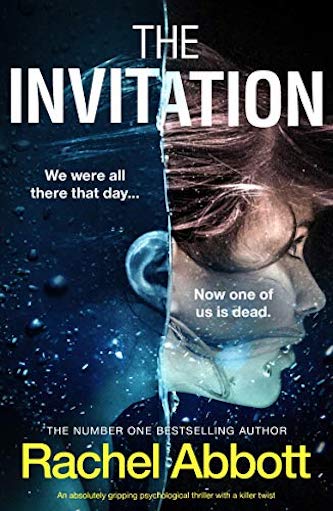 What does Lucas have in store for his guests? A candlelight vigil? No. He has devised a little game to make them tell the truth.

The first time Jemma and Matt were invited to the imposing ocean-view home belonging to Lucas Jarrett, it was for an intimate wedding that ended in tragedy.

Jemma will never forget the sight of the girl’s pale body floating towards the rocky shore.

Now, exactly one year later, Jemma and her husband have reluctantly returned at Lucas’s request to honor the anniversary of an event they would do anything to forget.

But what Lucas has in store for his guests is nothing like a candlelight vigil.

Someone who was there that night remembers more than they’ll admit to, and Lucas has devised a little game to make them tell the truth.

We were all there that day.

Now one of us is dead…

Rachel Abbott’s debut thriller, Only the Innocent, was an international bestseller, reaching the number one position in the Amazon charts both in the UK and US. This was followed by the number one bestselling novels The Back Road, Sleep Tight and Stranger Child, Nowhere Child (a short novel based on the characters from Stranger Child), Kill Me Again, The Sixth Window, Come a Little Closer, The Shape of Lies and Right Behind You. Close Your Eyes – the 10th in the Tom Douglas series – was released in February 2021.

In 2018 Rachel released the first book in a new series – And So It Begins. This was followed by The Murder Game in 2020 (The Invitation in the US).

Rachel’s novels have now been translated into over 20 languages.

In 2015, Amazon celebrated the first five years of the Kindle in the UK, and announced that Rachel was the number one bestselling independent author over the five-year period. She was also placed fourteenth in the chart of all authors. Stranger Child was the most borrowed novel for the Kindle in the first half of 2015.

Rachel now lives in Alderney – a beautiful island off the coast of France – and spends a few months of each year in the Le Marche regions of Italy, where she devotes her time to her love of writing fiction. For more information, see Rachel’s website at www.rachel-abbott.com

Praise for The Invitation:

‘Oh. My. Goodness. I finished it this afternoon and I’ve been thinking about the book all day! I honestly think this book is my favorite book ever. The writing was so phenomenal! It had me gripped on every single page!’ Goodreads reviewer, 5 stars

‘I read the entire thing in a day! The characters come fully alive in my head and I can almost see and hear them in my head… It was brilliant!!’ Goodreads reviewer, 5 stars

‘What can I say… WOW!!!… It kept me guessing and eating up the pages until the end… All I have to say about this one is I LOVED IT!!!’ Goodreads reviewer, 5 stars

‘Wow this book was awesome. It was creepy, scary, and tense and had me madly turning the pages. I couldn’t get enough and found it really hard to put down.’ Goodreads reviewer, 5 stars

‘As always, Rachel Abbott totally hit it out of the park!’ Goodreads reviewer, 5 stars

‘So many twists and turns you are not sure what’s coming next. Just when you think you have it figured out, the story takes you somewhere else. I love a book that keeps me guessing until the very end.’ Goodreads reviewer, 5 stars

Please click HERE to find The Invitation on Amazon.