Featured: The Girl in the Missing Poster by Barbara Copperthwaite 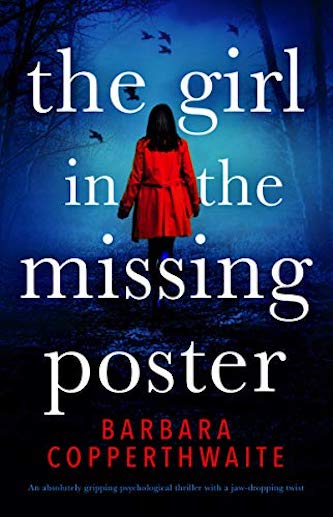 As the anniversary of her sister’s disappearance comes around, she puts posters up around her small town, desperate to know the truth.

24 June, 1994 – Nineteen-year-old Leila Hawkins runs from her father’s birthday party into the stormy night wearing her sister Stella’s long red coat. Some say she was crying, others swear they saw her get into a passing car. Nobody ever saw her again.

Present – This time every year, on the anniversary of that fateful night, Stella decorates the small seaside town she grew up in with pictures of her beautiful missing sister.

But after twenty-five years, is it even worth hoping someone will come forward? Perhaps the upcoming documentary will spark people’s memories by reuniting all the guests who were there the night Leila went missing.

As old friends gather and long-buried secrets begin to surface, the last thing Stella ever expects is a direct response from someone claiming they took Leila.

They want private details of Stella’s life in return for answers.

But as the true events of the night of the party play out once again, who is lying?

And who is next?

Barbara’s writing career started in journalism, writing for national newspapers and magazines. During a career spanning over twenty years, Barbara interviewed the real victims of crime – and also those who have carried those crimes out. She is fascinated by creating realistic, complex characters, and taking them apart before the readers’ eyes in order to discover just how much it takes to push a person over a line.

Her first book, Invisible, was ‘totally gripping, and scarily believable’ according to Bella magazine. Its success was followed by Flowers For The Dead, which was the Sunday Mirror’s Choice Read, beating Lee Child’s latest offering. ‘Will have you looking over your shoulder and under your bed… Original, gripping, with a deep psychological impact,’ their review read.

The Darkest Lies came next, published by Bookouture, and became a USA Today bestseller. The follow-up, Her Last Secret, hit the Number 1 spot on Kobo. The Perfect Friend is a No 1 Kobo and Amazon bestseller.

When not writing feverishly at her home in Birmingham, Barbara is often found walking her two dogs, Scamp, and Buddy, or hiding behind a camera to take wildlife photographs.

To find out more about Barbara’s novels, go to her Website: www.barbaracopperthwaite.com

Phew, what a read this was.

Stella lost her Twin sister Leila on a stormy, rainy night and as the anniversary of her disappearance comes around she puts posters up around her small town, desperate to know the truth.

On the 25th anniversary, a film crew wants to make a documentary about their story for Netflix.

This story is told from Stella’s point of view, a fiercely independent woman who prefers the company of her dogs. The soul-destroying absence of having the other half of you missing is portrayed brilliantly.

It is then told as part 9f of the documentary, a clever way of getting across the different stories.

Finally, the killer gets in touch and makes Stella reveals more of her secrets hoping to find out the truth.

This is so clever that you literally don’t trust anyone, and there were a couple of moments I gasped in shock at revelations I never saw coming.

All along there is a wonderful relationship between Stella and her dogs. As a dog lover, that was really nice to read.

This is an incredible book, loved it.

Please click HERE to find The Girl in the Missing Poster on Amazon.