Featured: The Fault Between Us By Bette Lee Crosby 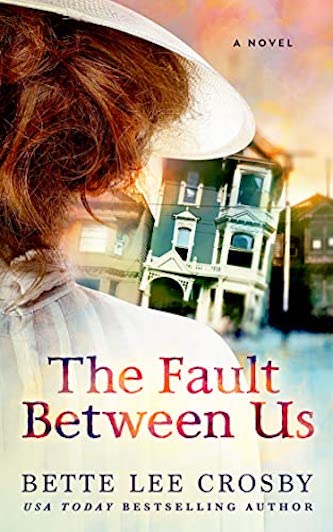 Chances were a million to one that a girl born and raised in Philadelphia would encounter a stranger from California on the trolley and fall madly in love, but that’s what happened. Templeton was not only taken with John Morehouse but also with his tales of life in San Francisco. As an aspiring fashion designer, the dazzle of a city called the Paris of the West, with its towering department stores and European couture was too much to resist.

Despite her family’s objections, she and John are married and, on their way back to California, before the month is out. To ease the heartbreak of such a move, Templeton promises her family that they will return for a visit every summer. She fully intends to keep that promise, but as her fashions gain popularity, the business grows increasingly more demanding. The trips back to Philadelphia become less frequent and she makes foolish choices she will come to regret.

Now, when she is on the verge of having everything she’s ever wanted, a devastating earthquake has torn across San Francisco and she awakes to discover the father of her baby is missing.

With the city in flames, Templeton’s daddy leaves Philadelphia and sets out in search of his son-in-law. He’s too old for such a trip and ill-equipped for the challenges he will encounter, but he’s the only hope of saving his daughter’s happiness.

Lines of communication are down and the city in shambles, so the only thing Templeton can do is pray she doesn’t lose both her daddy and her husband.

Samantha from Reader’s Favorite raves, “Crosby writes the type of book you can’t stop thinking about long after you put it down.”

“Storytelling is in my blood,” Crosby laughingly admits, My mom was not a writer, but she was a captivating storyteller, so I find myself using bits and pieces of her voice in most everything I write.

It is the wit and wisdom of that Southern Mama Crosby brings to her works of fiction; the result is a delightful blend of humor, mystery, and romance along with a cast of quirky charters who will steal your heart away. Her work was first recognized in 2006 when she received The National League of American Pen Women Award for a then unpublished manuscript. She has since gone on to win over twenty awards for her work including The Royal Palm Literary Award, the FPA President’s Book Award Gold Medal, Reader’s Favorite Award Gold Medal, In’DTale RONE Award Winner, and the Reviewer’s Choice Award.

Bette Lee Crosby has the beautiful gift of telling a story. I’ve read all of her books, and each one is intriguing and heartfelt. This one is no exception.

Templeton was a surprise to her parents who thought they’d had their last baby. Because she looks like her father’s great uncle Templeton, sporting the same red hair, she was named after him. As she grew, her personality also favored him. Templeton was smart, headstrong, and willful. As a young child, she made dresses for her dolls and as she grew, she became quite accomplished in drawing women’s fashions and was determined to be a fashion designer. Although Templeton’s parents suggested she should get married and raise a family, she was determined to have a career, despite the year was 1895, when such a thing was not common for women. In her hometown of Philadelphia, she did however convince Wanamaker’s, a local department store to feature her designs, which proved to be very popular.

While riding the streetcar one day, for Templeton, a life-changing event occurred. John Morehouse got on the streetcar and smiled at her. The smile did a strange thing to her heart. John is in Philadelphia temporarily for business purposes and plans to return to his home in San Francisco. For the remainder of his time in Philadelphia, he and Templeton spend every moment together and before leaving asks her to marry him and come to San Francisco. Her family is heartbroken to think of her leaving, however, putting Templeton’s happiness first, they have a small but lovely wedding, and immediately after, the newlyweds set off for San Francisco where they will encounter blessing as well as challenges and also some heartaches. Templeton will enjoy great success in the fashion industry, however, she learns the cost to her personally is high.

Bette expertly weaves into this intriguing, beautiful story, the disastrous earthquake of 1906, that nearly destroyed the entire city of San Francisco. Templeton is visiting in Philadelphia, at the time of the earthquake and is unable to reach John, who sustains serious injuries as portions of their house collapse on him. Eventually, when unable to make any contact with him, Templeton’s father sets off for San Francisco to find him.

What I’ve discovered about Bette’s books, is her stories come from her heart and go right into mine. Although the last page has been turned, I will be thinking of John and Templeton for many more days to come.

Please click HERE to find The Fault Between Us on Amazon.