Featured: The Enchanted by JC Brennan 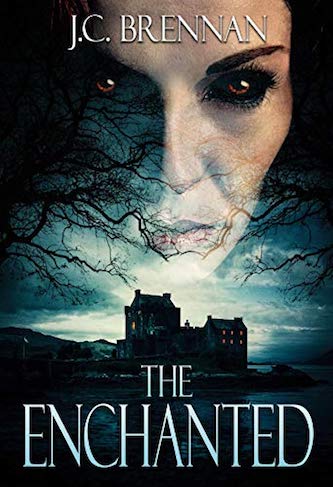 Rebecca Gentry, Becca, has grown up on her beloved grandmother’s stories.

The tales of castles, evil Lords, witches, and beings of magical realms have fascinated and mystified Becca.

Some stories her grandmother made up, but others were handed down through the generations of her family.

When Becca’s grandmother dies a week before her sixteenth birthday, leaving her and her father a large amount of money and a castle in Scotland, things begin to change for Becca.

She discovers her grandmother’s estate, Castle Fordottar, has a long and dark history.

Becca soon realizes her grandmother’s stories may not be mere fairy tales, after all.

J.C. Brennan was born in Flint, Michigan, and grew up in the small village of Skidway Lake. Brennan is a mother of three and an academic scholar.

She’s a published author, a poet, an expert seamstress, and a talented painter.

Her acquired skills and scholastic achievements helped her out of the small town of her youth, though her heart remains there.

She has won several awards from such notable sources such as New Apple, Readers’ Favorite, & Pinnacle Book Achievement.

J.C. Brennan currently resides in Arizona with her husband of nine years and her children and is hard at work with her next big series of novels.

The novel opens with a 7-year-old girl being told a scary story of evil magic by her grandmother.

Then the novel proceeds to tell the reader a story about, well, evil magic.

The protagonist, Rebecca (Becca) learns when she is almost 16, after the passing of her story-telling grandmother, that she is the heiress to a fortune that includes a castle on the east coast of Scotland.

When she arrives, she learns in quick succession that (a) she is descended from a long line of witches, (b) she is not only a witch herself, but a witch of extraordinary power (The Enchanted), and (c) she will ascend to her full power in a few days, on her 16th birthday.

In the process, she meets friends and a potential lover, all of whom use magic to one degree or another, and all sorts of preternatural creatures, included fairies and brownies.

But she also learns that the woods around the castle are the abode of dangerous creatures, like wulvers (werewolves), and that the once-human demon Hellina, who long ago gave her soul to Mahoun (the Devil, in Scots dialect), bears a grudge against her entire family and is determined to destroy Rebecca and all she holds dear.

The narrative is non-stop and fast-paced, and the story carries the reader along so that before we know it, we’ve reached the nail-biting climax.

Please click HERE to find The Enchanted on Amazon.