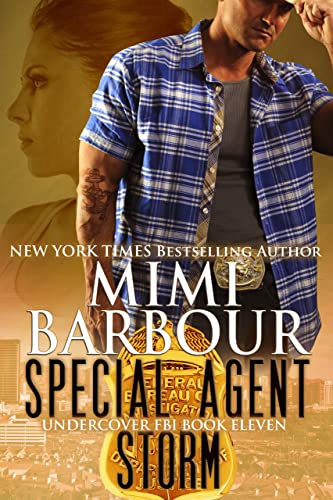 The news is devastating. It’s impossible… right? How can she be carrying a child when she hasn’t been with a man for over a year?

Agent Storm is way too gorgeous for a mere mortal.

Considering his looks mean nothing to him, that detail has hindered him all his life. For Kurt, it’s all about his ability to be a good Navy Seal and eventually the FBI agent that works undercover and gets the bad guys.

Therefore, when a stranger gives him a hard time in a bar, and then kisses him crazy before she’s done, the aftereffects of that meeting change his whole life.

From then on, her problems become his focus, and she leads him on a merry chase… especially when she informs him in no uncertain terms to back off because she’s married.

Ruby loves her profession as a firefighter, and though her mother lives in fear every day, Ruby clings to her career as a way to honor her father who’d died in a fire saving others.

After feeling unwell for some time, she sees her doctor, and when he informs her of the wonderful news of her pregnancy, she blasts the poor guy.

It’s impossible… right? How can she be carrying a child when she hasn’t been with a man for over a year?

The Best in Romance Series

Mimi lives on the East coast of Vancouver Island with her new puppy, Charli, and writes her various romances with tongue in cheek and a mad glint in her eye.

She’s been known to say: “If I can steal a booklover’s attention away from their everyday grind, absorb them into a fantasy love story, and make them care about the ending, then I’ve done my job.”

Guided by an unfounded sense of what her duty should be, Ruby kept putting her life in constant danger.

Her life turned into a dangerous adventure when the unexpected news of her pregnancy alerted her that she was a target and up to no good.

Agent Kurt Storm had his own trauma and when the impulsive and risk-taking Ruby entered his life, he was exposed to fears that triggered his need to protect.

Ruby’s job descriptions as a firefighter were very informative of the heroic work these servers do. I liked the way that Storm paid immediate attention to Ruby’s situation and was quick to seek answers and move resources.

He kept me alert to his deductions and reasoning.

I loved how the author took me through an adventure full of suspense with exciting and intense situations that kept me on edge trying to guess what could happen and suffering with the protagonists.

Cathartic! I think I shed a tear.

I liked the secondary characters of Molly and Jill and their interaction with their respective children.