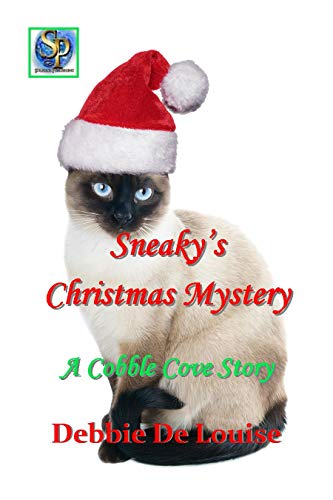 The mysterious and untimely death of a new owner of a pet shop has divided the town. Was it an accident or was it murder?

Another death has occurred in Cobble Cove near the holidays.

This time, it’s the owner of the new pet store in town who was felled by a case of cat food that crushed his skull.

Was it an accident, or murder?

While the townspeople including the sheriff are divided in their opinions, Sneaky and Kittykai, the library and inn cats, sniff out the truth.

My first novel, a paranormal romance, Cloudy Rainbow, was written after my beloved cat, Floppy, died from diabetes and liver complications. The book was dedicated to him, and he is featured as a character in it. Cloudy Rainbow was reprinted by my publisher with fresh edits, a new cover, and a few updates.

The other books in my Cobble Cove series include Between a Rock and a Hard Place, Written in Stone, and Love on the Rocks. I’ve also published a romantic comedy novella, When Jack Trumps Ace, and two standalone mysteries, Reason to Die and Sea Scope. My latest release is a medical mystery, Memory Makers, about a woman who volunteers to test a new memory drug in the hope of recalling the face of the man who killed her sister.

I won the Glamour Puss special award from Hartz Corporation for my Catster.com article, “Brushing your cat for bonding, beauty, and better health,” (June 2016). My short mystery, Stitches in Time, was published in the Cat Crimes Through Time Anthology, (1999).

I have also published several other short stories of various genres in Solstice anthologies. I live on Long Island with my husband, Anthony; daughter, Holly; and our cat, Stripey, Harry, and Hermione.

A quick coffee break read that has you catching up not only on the humans but also the animal residents in a small town.

The death of a new owner of a pet shop has divided the town. Was it an accident or was it murder?

Christmas is coming and everyone gathered in town by the Christmas tree.

However Sneaky the library cat is given the cold shoulder by the cat he most admires.

Whilst the partner of the pet shop has a rant and drives the new widow and her daughter away in tears.

A tea party, a man with a gun, another murder, and a kitty attack.

Will they clear up what has happened and why before Christmas Day arrives?