Featured Selection: In Our Blood by William J. Goyette 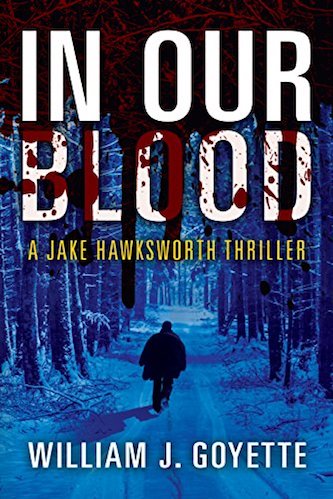 Jake, still reeling from the unsolved hit-and-run death of his wife, and Drew will be reunited once again when a crime from Drew’s novel-in-the-making becomes a devastating reality. Is the kidnapping of Drew’s son somehow linked to the murder Jake is investigating?

And could the person who has haunted both men for decades be responsible for these seemingly unrelated events?

As Jake races to protect Drew’s family, they find themselves on a collision course with fate – derailed by a series of breakneck twists and turns that culminates at an isolated, snow-ravaged house.

It is here that long-buried secrets are unearthed and Jake realizes, to his horror, that his hunches are not always right.

That the keys to solving his wife’s death and a heinous, decades-old crime have been under his nose all along. 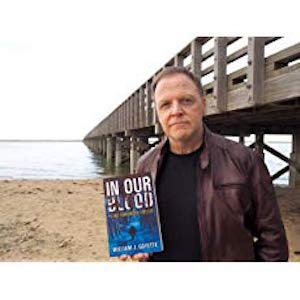 I’ve been a “word nerd” for as long as I can remember. My mind is always in the “on” position, with new stories and characters constantly brewing. Right now, I have about a half dozen ideas for future novels banging around in my head.

In Our Blood is the first in a series of detective thrillers featuring Detective Jake Hawksworth. Jake isn’t superhuman. He can’t take on five guys at once, can’t scale buildings, can’t save the world from weapons of mass destruction. Jake is everyman.

When I’m not lost in my fictional world, I’m traveling the real world with my wife, spending quality time with my two daughters, or rolling around on the ground with my dogs.

In Our Blood is tightly-written, entertaining and skillfully crafted, with memorable, unique characters. There were plenty of clever, (and one heart-wrenching) twists that threw me for a loop – one, in particular, had me mentally kicking myself for not figuring it out, as it was staring me in the face. The ending was quite unexpected and I was very satisfied with how things wrapped up.

The plot favoured action over character study (which I tend to prefer in a crime novel), yet the characters were in no way one-dimensional, and I became completely engrossed in them, and have found a new favourite detective in Jake Hawksworth.

I especially adored his sense of humour – he was quick with the comebacks and one liners, and his internal dialogue amused me many times over the course of the novel. I also liked how instead of being portrayed as a whiny teenager, waiting to be rescued, the kidnapped boy Ben, was resourceful, smart, and never gave up on trying to escape his dire situation.

This was very refreshing and had me really invested in what happened to him. Excerpts from his father’s (Drew) latest manuscript were used at the beginning of Ben’s chapters, which eerily mirrored what he was going through, and successfully upped the tension.

The novel utilized several third-person POV’s including Jake, Ben, Jake’s old friend, and author, Drew McCauley (Ben’s Dad), Drew’s wife Paige, a sociopath, one baddie, and some minor characters. There were also flashbacks to when Drew was a teenager, and Jake a newbie cop, as well as to the night Jake’s wife Sheila was killed in a hit-and-run.