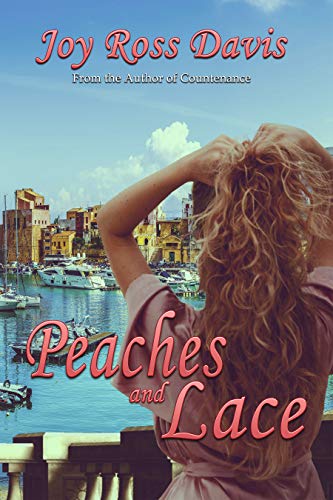 Between her guardian angel and the Prime Minister’s aides, can this killer be stopped?

Peaches Malone, a world-famous wedding gown designer, has moved her business from Atlanta to Portugal. Beautiful, vivacious, headstrong, and feisty, Peaches demands perfection from those around her.

She is highly sought after by royal families all over the world. But, within her castle walls, a stranger lurks, a man gone mad with a vengeance, a man whose only goal is to destroy her. But Peaches has one person on her side, a man she calls her guardian angel.

Tall, broad, handsome and supernaturally strong, he visits Peaches often, appearing as if out of thin air. The bond between them strengthens until, for the first time in her life, Peaches falls in love.

On the night of her first runway show in Portugal, Peaches receives a threatening message written in blood. Since she has no idea who wrote the message, she calls on her friend, the Prime Minister, who rushes to her aid and posts his own security team outside the auditorium.

But the killer is one step ahead, for he has already managed to secure a spot as one of her top male models.

Between her guardian angel and the Prime Minister’s aides, can this killer be stopped?

oy Ross Davis is of Irish descent and a student of the lore and magic found in the hills of Tennessee.

After a twenty-five year career as a college English professor, she traveled to Ireland and worked as a writer and photographer, publishing numerous travel articles and photos for an Irish travel agency.

She has been a contributing feature writer for a local newspaper and has published articles in Southern literary magazines.

She lives in Alabama with her son and beloved dogs. She loves to speak at conferences, book club meetings, and events to share her connection with angels and the stories behind her books.

Peaches Malone has lived in abject poverty, sometimes by necessity and other times by choice. She chose to ‘over economize’ to gather her wealth into one resource for the day that she would be able to make her major career moves.

Searching for her long lost father and feeling abandoned, Peaches lives and works with her mother. Peaches has a fantastic talent — the ability to design fabulous clothing. She focuses on one of a kind high-cost wedding gowns. Her mother’s sewing skills turn the gowns into reality for brides or for the runway shows every season.

While organizing her business and studio in Atlanta, competitors in the design business are revealed as serious design thieves. And Peaches’ new romantic connection comes into her life. In keeping with the paranormal promise of the novel, TuckerD is extremely different from any other man she’s ever known. Is he angelic?

When pursuit of the criminals takes Peaches and friend Lily to Portugal, she reconnects with the Prime Minister’s family. The country has a fantasy effect on Peaches and she decides to stay and build her future wedding gown studio in a dream castle there. TuckerD follows her, protecting and proposing as the theft drama is brought to a close.

There are open ends to their lives for a sequel that could reveal more about Peaches’ ancestry. And what about Lily? Her story has been very quiet…hmmm. Or mother, Margaret-Ann…a few lines gave me a hint of senior romantic possibilities. Approaching maturity, at nearly 40 years or older, Peaches and the other characters offer a point of view that is unusual for many other steamy romances featuring nubile teeny- boppers.

Clean, flinch-free reading. Romance, but no excessive sexual scenes or profanity. The fashion descriptions, from fabric to shape create fabulous visuals for readers. The architecture and decor of every building, home or office are richly described for similar mental/visual reading.

Additionally, cosmetics, perfumes, and hairstyles are a clear pallet of color and design for readers to spread across their mind’s eye.

There is tension amongst the romance, but not the kind that gives you nightmares. This is a good read for a rainy day or to take with you when traveling. Especially traveling, because the high flying fantasy will have you double-traveling.

The pace of the book is very fast. The story covers a lot of country and many incidents in rapid succession. While there is a lot of description, there is little repetition…readers aren’t reminded about the plot/goal on every alternate facing page!