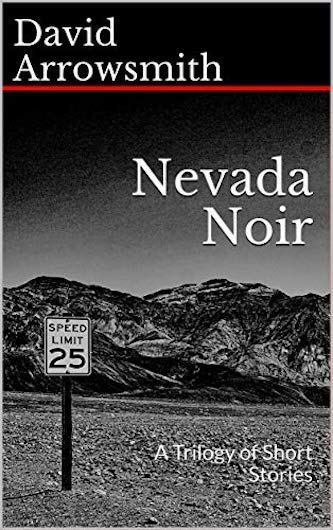 Review: Brutal and beautiful, like a Dodge Charger kicking up dirt and grit as it tailspins away and disappears in a cloud of grimy dust.

In the world of Nevada Noir, no one gets out clean…

In these three dark and brooding short stories, set in and around the US state of Nevada, a cast of disparate characters struggle with greed and temptation, and the cursed lure of easy money…

…an old man goes in search of his son in the aftermath of a terrible storm, a couple down on their luck make a life-changing discovery and an ex-cop has one last impossible decision to make…

Are you brave enough to take a trip to the badlands today?

Set in the barren scrublands of Nevada; the neon glow of Sin City Las Vegas; and the stark, deadly beauty of Zion National Park in Utah; Nevada Noir is perfect for fans of noir, neo-noir, western, neo-western, pulp fiction, southern gothic and crime and detective fiction and mystery.

Born and raised in London, England he has also lived in Hong Kong and Manchester. He is half Colombian and half British.

He traveled to Nevada and the surrounding areas on a road trip with his wife and was struck by the beauty and contrasts of the natural and man-made environments.

The photograph used on the cover was taken while on this trip by his wife – a professional photographer.

These stories began life as frantically typed notes on his smartphone on a morning commute to work – these would be the first paragraphs of the first story in what would become the Nevada Noir trilogy. He decided to share these stories as a response to the outbreak of COVID-19 and the ensuing lockdown.

He was inspired to write this trilogy by his love for authors such as Cormac McCarthy, Elmore Leonard, James Ellroy, Raymond Chandler, Martin Cruz Smith, John Le Carre, Chester Himes, and Lee Child – and by films such as Hell or High Water; Pulp Fiction; True Romance; Paris, Texas, and Fargo.

Arrowsmith is currently writing his first novel, and also has plans for further noir tales.

Nevada Noir cuts a bullet trajectory through the lives of several disparate characters & you need to read it now. Peopled w fascinating folks living lives of varying-volume desperation, Arrowsmith weaves together their stories, connecting them whether they ever notice or not.

Pure fun, you barely notice the gathering weight of the central question – what is the cost of a life? – until it is upon you. Arrowsmith’s vivid narration locks you in each scene, his facility with noir’s gritty-glee and his intensity firing you forward.

Arrowsmith’s easy voice is a fascinating British slant on quintessentially American #literary ground, he writes a bite-size meditation on the human condition through flipped cars, gunfire, gambling, death, sex, and disappointment. Crystalline but complex, the book holds you.

You owe yourself Nevada Noir. Quick & dirty, a gulp of pulp that’ll nourish you for a long time after. Five days since reading it in one devouring session, Arrowsmith’s final image still burns in my head. Pick up Nevada Noir now.