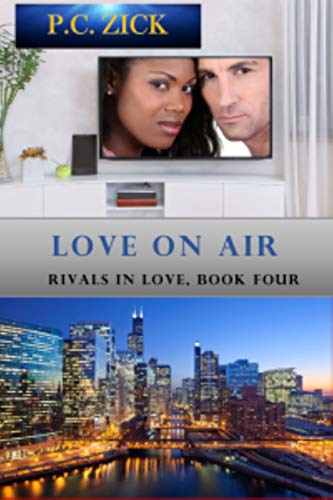 They forgot one thing while becoming rising stars. They forgot all about love.

Two TV newscasters find common ground in their pursuit of the story. But their methods for coping with horrific news collide during a shooting at Navy Pier.

Diamond Crandall anchors his own cable news show, The Diamond Report, and is resented by some for his age and lack of experience. But he’s proven himself as a solid journalist, and most of his colleagues respect him. When Hope Colson shows up to vie for a seat next to him as co-host, he balks, until he sees her in action.

The producer of his show, Jane, only cares about ratings, not standards. When Jane admits she’s hiring Hope, not for her standards or talent, but because she’s black, Diamond is taken aback and unsure if he should tell Hope or not. But one of Diamond’s colleagues—one who’s still resentful of Diamond’s ascent at the network—tells Hope that it is Diamond who wanted a black woman hired for diversity’s sake. What had started as a promising professional, and perhaps personal, relationship deteriorates into the two of them barely speaking.

It doesn’t help that the rest of the Crandall family has fallen in love with Hope, and even Senator Nolan Crandall, gives Hope an exclusive interview, which rankles Diamond especially since Hope has been giving him the cold shoulder treatment. When Hope panics during a shooting at Navy Pier in Chicago, Diamond advises her to get help. It’s only when Diamond sees a family collapse that he goes into his own form of PTSD.

They both reveal the past tragedies that refuse to heal since both have refused to talk about them. From Chicago to D.C. and the halls of Congress, the two journalists appear on the air together, but when the lights go off and they face each other, the truths long hidden will determine if the chemistry on the air translates to real life.

Love on Air is the fourth novel in the Rivals in Love sweet contemporary romance series. Rivals in Love showcases the Crandall family siblings who are all in successful careers. But they forgot one thing while becoming rising stars. They forgot all about love. Their father, a U.S. Senator, aspires for high office, but their mother, the heir to a fortune, only wants her children married and with children.

P.C. Zick describes herself as a storyteller no matter what she writes. And she writes in a variety of genres, including romance, contemporary fiction, and creative nonfiction. The bestselling author has won various awards for her essays, columns, editorials, articles, and fiction.

The three novels in her Florida Fiction Series contain stories of Florida and its people and environment, which she credits as giving her a rich base for her storytelling. She says her, “Florida’s quirky and abundant wildlife–both human and animal–supply my fiction with tales almost too weird to be believable.”

P.C. writes both sweet and steamy romances. The sweet contemporary romances in her Smoky Mountain Romances, are set in southwest North Carolina. Another sweet romance series, Rivals in Love, contains two books with four more in the works. All six follow the Crandall family of Chicago as the siblings find love despite their focus on successful careers.

Her steamy romances go from Florida to Long Island. The Behind the Love series, set in a small fictional town in Florida, feature a community of people who form bonds as they learn to overcome the challenges of their youth. Her Montauk Romances are set in and around Long Island and feature simple, yet sophisticated beach houses designed with romance in mind. The two books in this set are filled with steamy scenes as love grows and thrives.

No matter the genre of novel, they all contain elements of romance with strong female characters, handsome heroes, and descriptive settings. She believes in living lightly upon this earth with love, laughter, and passion, and through her fiction, she imparts this philosophy in an entertaining manner with an obvious love for her characters, plot, and themes.

This book follows Diamond Crandall, Mond to his family and friends, and his career as a newscaster. But the producer of his show has been hired to get the ratings up, and she reckons diversity will achieve that, hiring Hope Cromer.

Mond is disgusted with the producer’s reasons for hiring Hope, but a bitter rival ascribes those to Mond, leaving Hope wary and mistrusting. There is so much more than those machinations in this book, though, and it is, I think, my favorite so far.

So many topical issues are covered, gun control legislation, inclusivity, and then of course there are the Crandalls themselves – with weddings, engagements, and a frightening experience that will make Mond revisit all his relationship issues.

As always, PC Zick has written characters that you want to know better, and she’s written a story that leaves you wanting more.