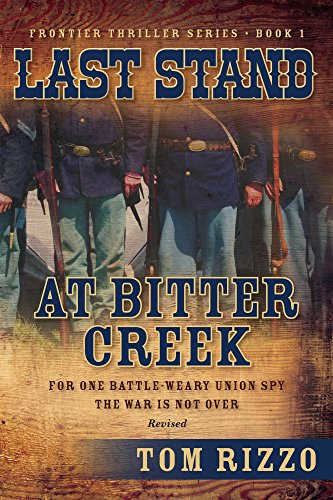 It opens with a bang, it has a fantastic premise; a gold heist, murdered soldiers, and the theft of a priceless historical document.

On a muggy spring afternoon in the rugged hill country of northeastern Pennsylvania, gunfire explodes from surrounding hillsides.

The massacre, carried out by a rogue military commander, triggers a series of events that lure Union spy Grant Bonner into one last mission involving a conspiracy of cold-blooded killing, a multi-million dollar gold heist, and the brazen theft of a priceless U.S. historical document.

When the mission is compromised, Bonner is ambushed, and left for dead—but survives, only to find himself the target of criminal blackmail.

One man can clear his name, but when they meet, something goes terribly wrong.

Undeterred by relentless odds, and a long journey not of his choosing, Bonner emerges from hiding to pursue a cryptic clue he hopes will lead him to the one person responsible for trying to destroy his life.

The hunted and the hunter travel a long, dangerous trail to make their Last Stand At Bitter Creek.

His writing journey has taken him from radio and television news reporting to The Associated Press, where he worked as a correspondent, followed by several years in advertising and public relations.

He grew up in central Ohio, lived in Great Britain for several years, and now calls the Midwest home.

Tom Rizzo considers American history a storyteller’s paradise. He believes writers who write about the West have a responsibility to bring historical adventures to life in a way that keeps readers entertained about what Theodore Roosevelt once described as “the great leap Westward.”

His obsession with the history of the American Frontier began when he started reading stories by Louis L’Amour, Matt Braun, Elmer Kelton, and Jory Sherman. TV and motion pictures played a significant role too. The Lone Ranger, Durango Kid, Randolph Scott, Paladin, Robert Conrad and Ross Martin in The Wild, Wild West, and Clint Eastwood and other characters in so-called Spaghetti Westerns.

The American frontier represented an extraordinary time and place in American history, populated by colorful, larger-than-life heroes and rogues who crisscrossed the high Plains and beyond.

As a storyteller, blogger, and speaker, and naturally curious amateur historian, Tom writes a blog about this particular time in the nation’s history by utilizing fictional techniques to tell real stories about the characters and events of the late 19th and early 20th centuries.

In addition to his novel, “Last Stand at Bitter Creek,” Tom completed a three-volume non-fiction series about the American West. “Tall Tales from the High Plains & Beyond” features dozens of stories about Old West lawmen, outlaws, and other intriguing characters and events

“The wrong kind of ambition can compel a man to do almost anything,” says David Webster, one of the characters in “Last Stand at Bitter Creek”, a historical action-adventure novel set just after the American Civil War.

A time when carpetbaggers, scalawags, swindlers, and thieves pillaged and plundered the defeated South in more ways than one. Some went west to launder their ill-gotten gain and to create their own empires.

Last Stand at Bitter Creek has all the makings of a classic Western novel. Much of the story takes place in the West, particularly Wyoming, during the post Civil War years. It opens with a bang, it has a fantastic premise; a gold heist, murdered soldiers, and the theft of a priceless historical document. It has good guys and bad guys, a hero and a villain; it has beautiful, strong, independent-minded women. The plot is the stuff movies are made of.

But what I liked best about the novel is the larger theme it addresses. At what point does ambition become greed? And when does greed combine with excessive power to become an evil force? A sociopath with a force of cowboy thugs ready to do his bidding is hell-bent on abusing his wealth and power.

He will stop at nothing; he will even kill his wife. It takes a strong, persistent, and dedicated man (who gets by with a little help from his friends) to exact revenge for the villain’s string of audacious crimes. Reading Last Stand at Bitter Creek reminded me why I like Westerns.