Featured: Land of Hope and Promise by W. L. Phillips 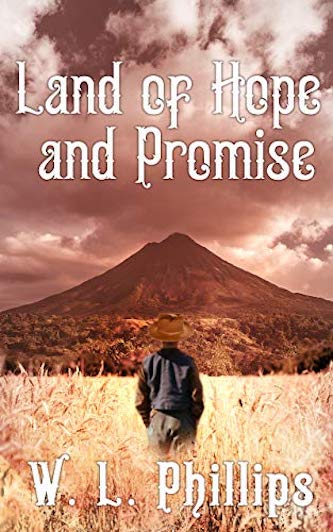 W. L. Phillips has captured the heart and soul of early America, the spirit of adventure on the American frontier.

Four orphaned brothers and sisters fleeing the oppression of Ireland leave a ship at New York City. Their father did not have enough money to make the journey with them. Their mother died at sea. How can the orphans survive and endure the hardships that await them in the great western landscape of a brave new land?

Riding across America on the orphan train, Daniel McFarland is the oldest boy at the age of ten. He watches as his brother and sisters are adopted by farming families, leaving him alone in a wild and unpredictable land. No one wants him. Too small to work, they say, and, they can’t afford another mouth to feed.

Daniel runs away from the train and meets up with ranchers and cattlemen returning home from completing a trail drive north. With the help of the ranch foreman, Daniel now has a roof over his head and meals to eat.

He becomes a man, as tough and self-reliant as the rugged land around him. And he begins to follow his dream of bringing his scattered family back together again.

Can he track down his brothers and sisters, and will they all be able to find the Land of Hope and Promise that his mother had told them about so long ago

From the time I was a small child until now, I’ve always been the one to ask, “Why.”

Born in Northern Ohio on a dairy farm, I learned what it meant to work. In High School, my English teacher told me if I opened my book I would get a better grade. I asked her how my learning about adjectives, pronouns, and adverbs was going to help me milk the cows any better.

They never taught it in school, but I needed to be thinking about tomorrow. When I awoke every morning, I realized that today would soon be yesterday. What would I be doing tomorrow? Writing books now, I wish I had listened to my teacher yesterday.

Before I began writing my first book, my jobs took me into the outdoors with people, plants, animals, and equipment. One company had me flying all over the United States and Canada. For another company, I drove an18-wheeler – tractor trailer across the rivers, mountains, and valleys of our great country. I wondered why people needed to travel to Europe when there was so much country around them they had never seen. It was in their own backyard.

When I began researching genealogy on my father’s family, I found out his ancestors came from Eastern France in the mid-1800’s. That started me thinking. In American History, teachers taught us about the Civil War, Lincolns assassination, The Louisiana Purchase, the Boston Tea Party, and the Revolutionary War.

However, they never taught us about the families who loaded their children, along with everything they still owned, and sailed across the ocean to the great unknown, a place called America.

They never told us about their struggles to survive their journeys across the trails, rivers, and mountains, always trying to find a better place to live. Stories about their hardships and joys need to be told. What I write is historical fiction. I hope people who read my stories find them as enjoyable as I did while researching and writing the book.

I still love being out of doors. I live in the piney woods of East Texas, and today limit my activities to camping, fishing, hunting, and writing. I carry a notepad with me wherever I go. I never know when I’m going to find another story worthy of being told.

Land of Hope and Promise is the poignant story of four children who find themselves abandoned in a new world they really don’t understand.

The family left behind the turmoil of Ireland to sail to America and find a home that promised so much: peace, freedom, and independence.

Their mother had told the children it was a land of hope and promise.

It was a place to build their future and fulfill their dreams.

But fate dealt them a cruel hand.

Their father did not have enough money to sail with them.

The children would never see him again.

The mother, fighting to hold the family together in spite of the obstacles facing them, died at sea.

And now the children are alone and on their own.

They are orphans stranded on the vicious streets of New York.

But time and circumstance move them west.

Daniel, the oldest boy, had promised his father that he would protect the family regardless of the odds they might face.

And he feels he has failed.

Daniel watches as each child finds a new home, adopted from the orphan train. The family is separated, knowing they will never see each other again.

Where have they gone?

What kind of life will they have?

Daniel has no idea, only nightmares in the solitude of the orphanage.

He’s the only child left.

He’s simply another mouth to feed.

No one wants him.

So Daniel runs away and strikes out on his own to confront the great unknown on the Western frontier.

Land of Hope and Promise is the coming of age story of his struggles to survive unforgiving weather and a harsh landscape that show him no mercy.

He learns to ranch.

He learns a bullwhip is a better weapon than a gun.

And all the while, he has only one thought in mind.

Sooner or later, he vows to bring his family back together again.

W. L. Phillips has captured the heart and soul of early America, the tragedies and triumph of a lonely boy with an undominatable and unwavering determination to succeed in an empty territory that wants to defeat him, the spirit of adventure on the American frontier. His is a story that you won’t soon forget.