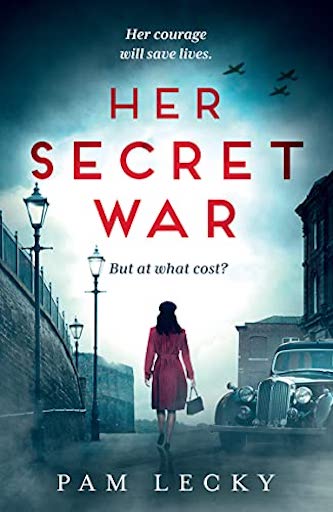 A gripping story filled with espionage and suspense that explores a deadly tangle of love and espionage in war-torn Britain.

With nothing to keep her in Ireland and a burning desire to help the war effort, Sarah seeks refuge with relatives in England. But before long, her father’s dark past threatens to catch up with her.

Sarah is asked to prove her loyalty to Britain through a special mission. Her courage could save lives. But it could also come at the cost of her own…

June 2019, saw the release of No Stone Unturned, the first book in the Lucy Lawrence Mystery series, set in the late Victorian era. This was closely followed by the sequel, Footprints in the Sand, in March 2020, which is set in Victorian Egypt. Pam is currently working on the third book in the series.

Her Secret War by Pam Lecky is a great WWII-era historical fiction that has it all: mystery, suspense, history, espionage, action, and a dash of romance all wrapped up into an addictive and intriguing novel.

I really enjoyed the unique twist that this book delivers. It takes the well-written WWII time period and incorporates the political intrigue and unsettled relationship of Ireland and the UK during a pivotal time period.

I really enjoyed learning a bit more of what occurred within Northern Ireland, Ireland, and England in respect to the countries’ stances on the Allied vs Axis corners and also their own responses to the atrocities and damages to one another’s own countries.

The way the author placed these historical accounts into the fictional narrative was excellent.

I loved Sarah Gillespie as the main character as well. She is portrayed with the dichotomy of helpless in respect to her roots, her family, what happens to those she loves, and where she comes from, yet she is willing and formidable in her quest to right wrongs, prove herself, and take control in what she can.

She is smart, strong, brave, and passionate but yet is realistic, likable, and flawed. I enjoyed her story and the high-stakes tasks she is forced to take on.

The twists and turns lead to surprises and kept me engaged throughout. Does she survive unscathed? Does she succeed and prove her loyalty, and if so, where does that loyalty lie?

I will not divulge anything further…one must read to find out for themselves. I will just say that I highly recommend one do so and that they should be as entertained and satisfied as I have been with this wonderful Historical Fiction novel.

Please click HERE to find Her Secret War on Amazon.