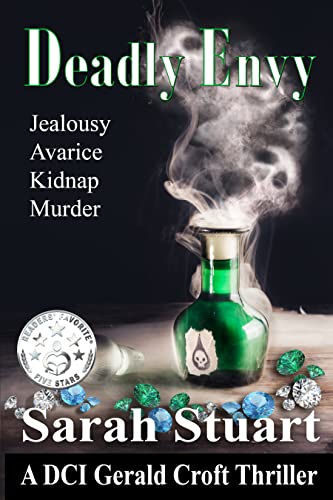 Can DCI Gerald Croft stop a crime wave before the media pick up the story and put him in the chief superintendent’s firing line?

An armed raid on a jewellers’ shop – deaths that might have been a suicide pact or murder – a teenage girl kidnapped.

Is there more to come?

Sarah Stuart lives in County Durham, North-East England with her husband. London is her “second home”; she loves the theatre – musicals, plays, opera, and ballet – and her knowledge of England’s capital shows in the background of her books.

The Royal Command Family Saga series is based on Sarah’s experience of supplying dogs for the stage, which brought her into contact with producers, directors, wannabe actors, and stars of stage and screen.

The Christian Richard and Maria Trilogy were written for her niece, a young teenager, and Sarah acknowledges her debt to Paul Tait, an American composer and performer. for permission to use his song lyrics.

Sarah Stuart’s first crime thriller was written with the generous help of John Nicholl, best-selling author of psychological thrillers. He had read her romantic suspense novels and suggested this was the next logical step. Always up for a challenge, Sarah created the world of DCI Gerald Croft in the fictional London Borough of Garton.

Sarah donates her royalties to wildlife charities worldwide, and to rescue shelters for abandoned pets. Her own rescue dogs hold a special place in her home and in her heart.

This is the second book in the D.I Croft series, and he deals with a number of cases of crime, including kidnap and murder.

I like this book even better than the first.

One of the main characters, a particularly prolific kidnapper, has a good side and you find yourself sympathising with his point of view, at times.

I think that shows the particular skill of the writer, to get the reader to empathise with a ‘baddie’ character.

This book shows the best and worst of human nature, with the underlying theme of ‘that person has what I want’.

If you like detective stories, you’ll really enjoy this book, especially how close the action comes to D.I.Croft’s family.

I couldn’t put the book down.