Featured: A Covenant of Spies by Daniel Kemp 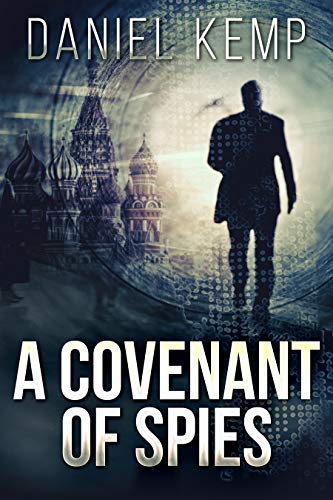 Enter the dangerous world of espionage where a man’s life hangs within a web of deceit.

In 2007, intelligence operative Nikita Kudashov attempts to escape his native Russia after a series of top-secret spying operations.

Years later, Patrick West of MI6 is assigned to investigate the operations Kudashov took part in and discovers a shocking connection between the former Soviet Union and the Foreign And Commonwealth Office.

Can West unravel the ambiguous connection – and the final clue that disguises the information Blythe-Smith never passed on to the Secret Intelligence Service?

Daniel Kemp’s introduction to the world of espionage and mystery happened at an early age when his father was employed by the War Office in Whitehall, London, at the end of WWII. However, it wasn’t until after his father died that he showed any interest in anything other than himself!

On leaving academia he took on many roles in his working life: a London police officer, mini-cab business owner, pub tenant and licensed London taxi driver, but never did he plan to become a writer. Nevertheless, after a road traffic accident left him suffering from PTSD and effectively–out of paid work for four years, he wrote and self-published his first novel —The Desolate Garden. Within three months of publication, that book was under a paid option to become a $30 million film. The option lasted for five years until distribution became an insurmountable problem for the production company.

All seven of his novels are now published by Creativia with the seventh–The Widow’s Son, completing a three-book series alongside: What Happened In Vienna, Jack? and Once I Was A Soldier. Under the Creativia publishing banner, The Desolate Garden went on to become a bestselling novel in World and Russian Literature in 2017. The following year, in May 2018, his book What Happened In Vienna, Jack? was the number one bestseller on four separate Amazon sites: America, UK, Canada, and Australia.

Although it’s true to say that he mainly concentrates on what he knows most about; murders laced by the mystery involving spies, his diverse experience of life shows in the short stories he writes, namely: Why? A Complicated Love, and the intriguing story titled The Story That Had No Beginning.

He is the recipient of rave reviews from a prestigious Manhattan publication and described as–the new Graham Green–by a highly placed employee of Waterstones Books, for whom he did a countrywide tour of book signing events. He has also appeared on ‘live’ television in the UK publicizing that first novel of his.

He continues to write novels, poetry and the occasional quote; this one is taken from the beginning of Once I Was A Soldier: “There is no morality to be found in evil. But to recognize that which is truly evil one must forget the rules of morality.”

The chairman of the British Joint Intelligence Committee meets a Russian asset he vaguely remembers from an operation he was dangerously involved in some twenty-five years previously in Prague, Czechoslovakia.

However, he is unclear as to whether the Russian remembers him. The Russian’s purpose of the meeting is to offer British intelligence a prize that only his granddaughter is able to fulfill provided she is extracted from Moscow without arousing suspicion.

As he looks further into this Russian’s past he discovers that a previous chairman of the JIC had unearthed a web of deceit in which he was able to conceal not only one double agent but two; one stealing secrets from the Soviet Union and the other from the Americans.

The names of both agents are secreted away inside cryptic messages hidden in the vaults of the Foreign and Commonwealth Office.

How much does this Russian asset know of those messages and can the ambiguous intelligence communiqués be unraveled before it’s too late?