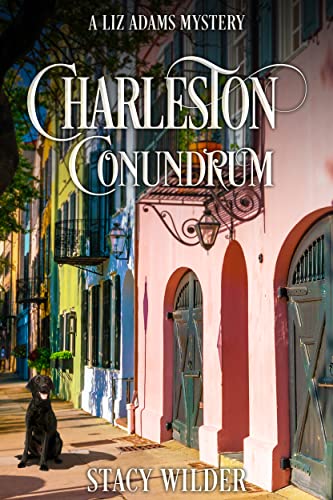 Review: The engaging cast of characters kept me guessing until the end as Liz Adams and her Labrador Retriever, Duke, go on the trail to solve the murder of Liz’s best friend.

Liz Adams never imagined when she moved to Charleston with her truth sniffing Labrador retriever, Duke, that she would use her skills as a private investigator to avoid winding up on Death Row.

Liz’s life is upended when her best friend, Peg, is murdered and she becomes a suspect. Liz’s gun was the murder weapon. Tensions flare between Liz and the cops as she rises to the top of their suspect list.

At the request of Peg’s father, Liz agrees to take on the investigation. Riding a roller coaster of emotions, Liz uncovers many secrets Peg kept from her despite their being best friends.

The suspects include a cast of characters: the ex-husband, the boyfriend, a coworker, several neighbors, and family members.

Charleston Conundrum takes the reader from Charleston, South Carolina, to Paris and back in the emotional unraveling of Peg’s life and death to a killer ending.

Her debut novel is the first in the Conundrum mystery series. Her mission is to deliver a delightful story to readers of all ages while benefiting a larger community.

She donates a portion of the proceeds from the sales of her books to causes that support wildlife conservation, and the homeless, both people and pets.

As well as writing, Stacy is passionate about her faith, family, Labradors, the causes that she supports, the beach, art, and reading books.

She and her husband live in Houston, Texas, with a totally spoiled Labrador retriever, Eve.

Review by Tricia Loves to Read:

Take a stroll through historic Charleston, where the food is decadent and the people are quirky, a tad nosy, but loyal.

Well most people, if you don’t count Sam, a grumpy old cop who is determined to put the main protagonist, Liz Adams, behind bars for the murder of her best friend, Peg, which she had nothing to do with.

Yes, the gun that killed Peg was Liz’s, but there is more to the story than meets the eye.

Not only is Liz reeling from the loss of her BFF, she also has to dodge Sam’s accusations that grow direr with each passing week.

Luckily, Liz is a trained PI and a good one. It isn’t long before she discovers that Peg had secrets, one of them involving a stranger of questionable character.

Can she solve the case before Sam solves it for her?

Pick up Stacy Wilder’s fun mystery and find out.