Featured: Chains of the Past by Sue Joslin 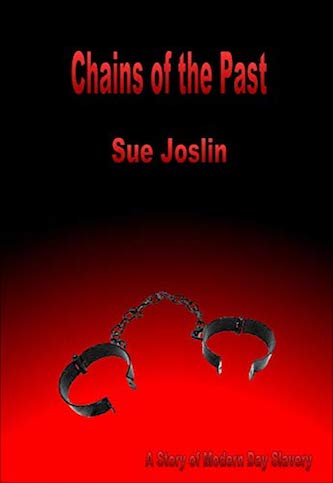 Sent away from her home in Romania, Elena dreams of a better life, but those dreams turn into slavery and murder.

A young girl’s family is torn apart by the greed and manipulation of a ruthless, international organisation.

How could her dreams of a better life end in slavery and murder?

Sent away, like her sister before her, from her native Romania, Elena finds herself trapped in Scotland. the property of an abusive man and his jealous wife.

Many years later, a young man worms his way into the slave dealer’s trust and earns himself a position near the top of the organisation.

But is he really what he seems?

As the daughter of an up and coming artist, now a bespoke illustrator, and an art historian, turned cleric, the author spent much of her childhood, moving from one home to another.

Eventually, at the age of 32 and having worked in a variety of jobs, including dairymaid, and accountant, she entered the world of counseling.

Six years later, as a volunteer counselor for Victim Support and part-time Post Office clerk, she finally found herself in a position to pursue her love of writing and began her first novel, Jenny’s Choice, which was nominated for the 2003 Mann Booker Prize.

Using her knowledge of how people react in adverse situations, she weaves her stories around human vulnerability.

Please click HERE to find Chains of the Past on Amazon.