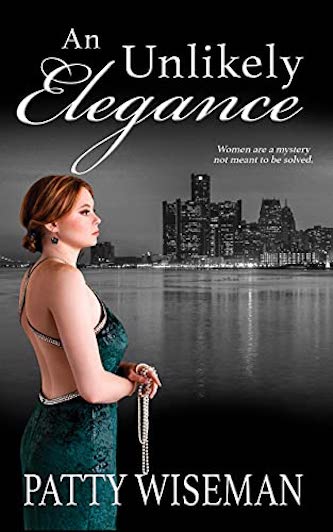 Kidnapping, bombings, and murder weave a blanket of secrecy, as well as the awakening of Fanny’s heart to the man she will choose.

The Crystal Daffodil marked the complete transformation of Fanny Zapelli from cheap, gangster girl to Miss Z, the sophisticated owner of the best restaurant in town.

Exposure of her past is jeopardized by the return of Jack Grey, a former rival mobster. He steps off the train and stares right into those amber eyes. Her beauty captivates him, but he loses sight of her in the train station bustle.

Whether by design or a stroke of luck he ends up at The Crystal Daffodil and comes face to face with this elegant woman.

Her rebuff does nothing to deter him, and the pursuit of her hand becomes his priority.

However, Gordon Young, a local newspaper editor, has designs on her, as well, and will stop at nothing to win her.

An eclectic group of characters joins the tug of war for her affections. Moose returns to protect his first love, Melvin, the chauffeur, suppresses feelings that go far beyond friendship, and Alexander Adams, a former suiter, hopes to pick up where they left off.

Kidnapping, bombings, and murder weave a blanket of secrecy, as well as the awakening of Fanny’s heart to the man she will choose.

The woman on the cover of this book is my own beautiful granddaughter, Savannah Cameron. She is holding my mother’s pearls. I love putting personal touches to my stories. They might not mean anything to the readers, but they sure mean everything to me!

When you come across it, you might well wrinkle your brow in confusion, but yes, a type of Sherry glass is called a schooner. Of course, you might think of this name as a type of sailing ship, and it is. I love putting interesting facts in my stories.

Master of the unexpected twist, breathtaking depth, and contagious storylines, romance novelist, Patty Wiseman is the daughter of a WWII Navy vet who survived Pearl Harbor. She was raised in Washington State, attended The Wesleyan College in Bartlesville, Oklahoma, then moved to Northeast Texas where she has resided for over 30 years.

Her self motivational book Success Your Way was published in March of 2016. She is published through Desert Coyote Productions. There are two more series in the works. One is a romantic comedy.

Her 1st Children’s Book was published on Sept. 24, 2017. Based on a true story that happened to her dog, Rescue at Wiseman’s Pond, is an exciting tale of Cutter’s bravery!

Patty’s 2nd book in the series, An Unlikely Beginning won 1st place in Romance with the Texas Association of Authors. Patty is a winner in the 50 Great Writers You Should Be Reading Contest and has a 2nd place finish in the Forward National Literary Awards contest in Romance, for the 1st in her series, An Unlikely Arrangement. Her second book won 1st place in the Texas Association of Authors contest in Romance and the 3rd book of the series won 1st place, as well. The 4th in the series won Honorable Mention in the same contest. She has entered and finished twice in the National Novel Writing Month challenge and won both times. 2007 & 2011.

An avid league bowler, Patty is proud to maintain a 145 average on her ladies league. The league quickly turned into a book signing event the first day she timidly displayed her 1st novel. She sold a total of 20 books and, in the same day, bowled her highest series yet, a 521 with a high game of 197. Heady stuff indeed.

Patty is married to husband Ron and has two grown sons and 11 grandchildren. She currently lives in Texas with her husband and her dog Cutter.

You can find out more about Patty on her website www.pattywiseman.com.

Please click HERE to find An Unlikely Elegance on Amazon.