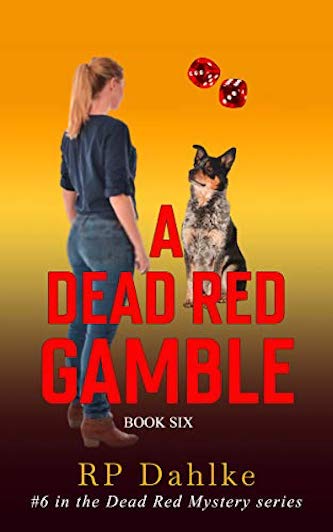 Review: The story is a mix of humor, family matters, and serious investigating as the duo takes on the task of finding out who murdered a local judge.

What if building a case against corruption gets you killed?

On track to a successful political career, a charismatic young judge’s detour into corruption will uncover the scandalous truth of his father’s murder…and ultimately his own.

Now it will be up to P.I. Lalla Bains to scour through a family’s painful secrets and find the killer.

My protagonist for the Dead Red Mystery series is a tall, blond ex-model turned crop-duster who, to quote Lalla Bains, has “been married so many times they oughta revoke my license.”

Lalla is no Danielle Steele character & she’s not afraid of chipping her manicure. Scratch that, the girl doesn’t have time for a manicure.

The first three books are based on my time running my dad’s crop-dusting business in the Central Valley of California. Beginning with A Dead Red Alibi, I moved just about everybody to South East Arizona where Lalla and cousin Pearlie continue to chase down criminals.

My romantic suspense books are also on Kindle: A Dangerous Harbor and Hurricane Hole. If you liked my Lalla Bains series, I know you’ll love these books: More romance, more suspense, in an exotic location with nastier bad guys, and a bald parrot!

My website features deals and steals for my books and authors I can honestly say I enjoy reading.

Oh, and one more thing: I do prizes every month, mostly from my travels. Sign up here: https://rpdahlke.com/contest/

Lalla and Pearlie are working, but haven’t managed to make money. Barely covering expenses, a new case with multiple clients lands in their lap when one of the potential clients gets murdered in his chambers.

While at the courthouse to see Judge Gavin, her dad’s foster kids get paid to cause a distraction that results in the killing of said Judge.

Now on top of worrying about her dad’s health, she’s also worried about the killer tying up loose ends by coming after the boys so she agrees to take on the case.

Things really get convoluted when she is first hired by the security company protecting the judge, then the stepfather of the Judge, and lastly, his mother.

Knowing the murder might have something to do with the Senior Borrega’s death means that her original suspect may be guilty of attempted murder and collusion, but it also means that Lalla may have to rethink who to trust and if she unknowingly placed one of her clients in harm’s way.