Sarah Cortez and Robert B. Wilkins 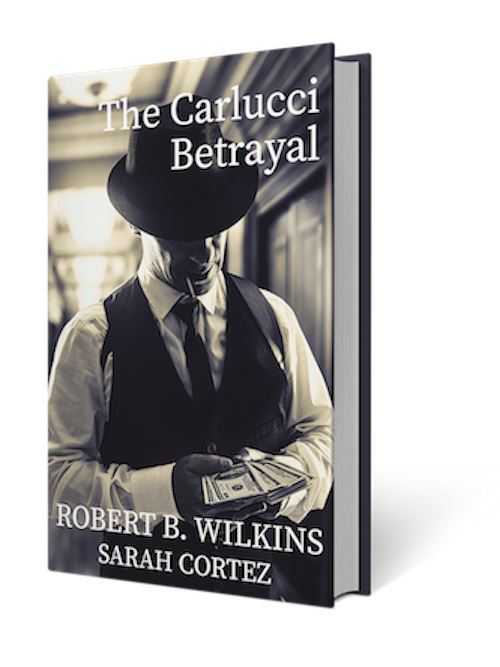 A fast-paced, thriller-diller of a crime ride, a rollicking novel of love, lust, and naked ambition filled with gunfights, intrigue, and a searing romance.

It’s the 1920s in an America dizzy with hot music, loose morals, and dangerous opportunities to make money.

Two small-town brothers, Vince and Frank Carlucci, cash in on their knowledge of the bootlegging business by targeting an island already controlled by two rival crime syndicates.

Little do they realize that soon they will be embroiled in more gunfights, intrigue, and searing romance than either one of them had anticipated.

As they juggle violent takeover attempts, local animosity, and uneasy political alliances, each of them experiences love and loyalty in unanticipated ways.

Accelerating conflicts propel the two brothers into a desperate confrontation under the turbulent winds of a deadly hurricane.

Only then, is the Carlucci betrayal finally concluded.

A fifth-generation Texan and native Houstonian, Sarah Cortez graduated from St. Agnes Academy in high school, and then attended Rice University majoring in Psychology and Religion. Her first graduate degree was in Classical Studies at the University of Texas in Austin.

She began her career by teaching high school in Houston, Texas, then completing an M.S. in Accountancy from the University of Houston-Central, Houston, Texas. An overwhelming interest in civic organizations and neighborhood safety brought her a series of volunteer positions with Neartown Association, ultimately resulting in citywide appointments to commissions and boards.

This civic participation spawned another burning interest: law enforcement. She enrolled in the police academy at the University of Houston-Downtown’s Criminal Justice Center. Upon graduation, she began as a law enforcement officer in Harris County, Texas. She remained an active-duty patrol police officer until 1999, when she began working as a reserve officer, so she could devote more attention to her writing and editing careers. She remains a reserve officer in Harris County.

During this time, she began a relationship with the University of Houston, where she served as Visiting Scholar, 1999-2001. She is the only Visiting Scholar for the Center for Mexican Studies who has been awarded two consecutive one-year appointments. There she began her work with young people fearful of writing. This experience evolved into her first anthology, Urban Speak: Poetry of the City, which contains poems by her students.

Her work on anthologies of poems, memoirs, and short stories honed her skills as a trusted and prize-winning editor, producer, and public speaker. Since Urban Speak: Poetry of the City, she has conceptualized and edited eight original anthologies:

Windows into My World: Latino Youth Write Their Lives was a winner of a 2008 Skipping Stones Honor Award.

– Says Booklist: “This collection illuminates both the familiar coming-of-age experiences that transcend cultural differences and the moments that are unique to Latinos in the States.”

Mystery Scene said of her Hit List: The Best Latino Mystery: “Genre-busting stories, some of them tender, some of them brutal, all of them offering an intriguing Latino slant.”

In 2012, her spiritual memoir, Walking Home: Growing Up Hispanic in Houston was published. She drew on the stories overheard as a child from and about her parents, grandparents, and other family members a deep faith centered in the Catholic religion. Partnered in the book are poems and short prose sections recalling her childhood and adolescence. This book received Honorable Mentions in the Los Angeles Book Festival Awards and the Great Southwest Book Festival.

Cold Blue Steel is a collection of poems reflecting on law enforcement thirteen years after “How to Undress a Cop”. She “employs frank language in sharp lyrics charged with weary passion,” says Diego Báez in Booklist. According to reviewer Jeffrey C. Alfier in Rattle: “Cortez’s lines were formed in the cauldron of an American Realist tradition: hard truths told with sharp fidelity by a large city beat cop.”

One of the poems in this book won an honorable mention in Rattle’s annual contest in 2011, and the book placed finalist in the 2014 Writers League of Texas Poetry Awards and the PEN Southwest Book Award in Poetry.

Tired, Hungry, Standing in One Spot for Twelve Hours: Essential Cop Essays is her memoir of 24 years in law enforcement, where she is still active. Says T.K. Thorne, retired police captain and award-winning author of “Angels at the Gate,” “Cortez has caught the essence of what it means to be a police officer with its “endless boredoms and dirt . . . its tiny, stark terrors” and the “hidden rewards of intense camaraderie, sense of mission, and the fulfillment of justice and duty.” She has explained the unexplainable in a fascinating read without flinching and with the eye of a poet.”

Her essays, poems, short essays, and book chapters have been published worldwide. They have been short-listed for honors, such as the Tucson Festival of Books Literary Awards. Her poetry has been part of the Poetry In Motion program of the Poetry Society of America and has been delivered and displayed at the United Nations in New York City as part of the Eighth Permanent Forum on Indigenous Issues. Today, she is in demand as an editor for all sub-genres of poetry, fiction, and non-fiction. She teaches creative writing workshops throughout the U.S. and abroad. And, she continues to write both prose and poetry.

Robert B. Wilkins was born in Galveston and completed a medical degree at UTMB, where he was awarded the prestigious Ashbel Smith Outstanding Alumnus Award.

While involved in his medical training throughout the U. S., he traveled internationally and visited casinos around the world.

Those experiences were the impetus for the writing of The Carlucci Betrayal.

Wilkins has also written the hit musical Galveston! The Vegas Before Vegas.

Praise for The Carlucci Betrayal:

The Carlucci Betrayal takes readers deep into the Mississippi Delta during Prohibition to witness the founding of a criminal empire, and not since The Godfather has a Mafia family captivated readers the way the Carlucci brothers do in Robert Wilkins’ and Sarah Cortez’s rollicking novel of love, lust, and naked ambition.

-Michael Bracken, Anthony Award-nominated editor of The Eyes of Texas

The Carlucci Betrayal is a fast-paced, thriller-diller of a crime ride. Newcomer Robert Wilkins and mistress of mystery Sarah Cortez team up to bring fresh action to the crime family novel. Love, lust, and lucre make an explosive combination between two brothers-best friends and best enemies. An extra? The unexpected touches of humor.

Please click HERE to find The Carlucci Betrayal on Amazon.