Featured: The Curse of Calico Jack by Colin Garrow 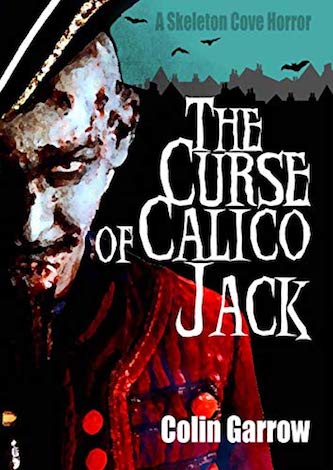 A mysterious book. A creepy kidnapping. A ghostly pirate on the loose.

Researching ideas for a pirate story, 12-year-old Jeff and his pal Suzi uncover a mysterious book that reveals weirdly moving images of a scary pirate captain.

After an old movie appears to replicate the images, one of Jeff’s teachers is kidnapped, prompting the investigative twosome to seek help tracking down the ghostly buccaneer.

THE CURSE OF CALICO JACK is book number 2 in this scary adventure series. If you like Goosebumps, you’ll love Skeleton Cove!

Colin Garrow grew up in a former mining town in Northumberland. He has worked in a plethora of professions including taxi driver, antique dealer, drama facilitator, theatre director, and fish processor, and has occasionally masqueraded as a pirate.

All of Colin’s books are available as eBooks and most are also out in paperback, too. His short stories have appeared in several literary mags, including SN Review, Flash Fiction Magazine, Word Bohemia, Every Day Fiction, The Grind, A3 Review, 1,000 Words, Inkapture and Scribble Magazine.

He currently lives in a humble cottage in North East Scotland where he writes novels, stories, poems, and the occasional song.