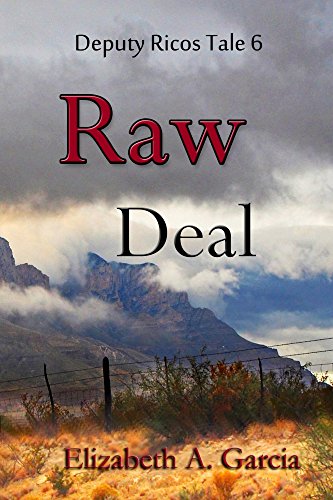 Why was there a skeleton above ground in my county? How did it get there and when?

Raw Deal by Elizabeth A. Garcia has received the Best in Texas Book Award for Women Sleuth Series. The award is presented by the Texas Association of Authors.

Tale 6 catapults Deputy Margarita Ricos from a spousal abuse case to a long-deserted shack on Terlingua Ranch, to one of the nation’s most notorious prisons—the Polunsky Unit of the Texas State Prison System.

An acquaintance from the deputy’s past, two local bad guys, a creepy man with a Darth Vader voice, and a 21-year-old skeleton will be along for the ride.

Why don’t you come, too?

Except for the low growl of approaching thunder, peace reigned in the Terlingua office of the Brewster County Sheriff. That was until a phone call interrupted the quiet.

“Craig!” I couldn’t keep the surprise out of my voice.

“I guess you were right about the phone.”

I had given Craig a cell phone a month before because he lives on a bluff with no neighbors. What if he had an emergency? Being a stubborn old man, he had claimed he’d never need a phone, never use it, and it was a waste of my money. I had asked him to humor me and left it with him.

“Are you all right, Craig?”

“Margarita, I found a woman—a dead body. What I mean to say is that I found a skeleton.”

My skin prickled. “Where are you?”

“Why are you whispering?”

“Why would anyone blame you?”

“Your sheriff will think I killed her.”

“What reason would he have to think that?”

“Have you forgotten about the head?”

In an earlier case, a severed head had been discovered in a trash heap, and a few misinformed locals thought Craig had done it.

“Craig, the sheriff only asked us to interview you to eliminate you as a suspect.”

“However you spin it, he thought I did it.”

“It’s in a falling-down wooden building that looks like it might have been a line shack at one time.”

Craig spends long hours exploring backcountry and abandoned buildings. I wondered if finding human bones would dampen his enthusiasm for his hobby.

“Where is the shack?”

“It’s way the heck in on Terlingua Ranch. I can take you there if you want. I don’t think you’ll want to go alone.”

“You’ve got that right.”

“The woman has been dead a long time.”

“Did you touch anything, Craig?”

“Are you kidding? I got out of there so fast you would’ve laughed.”

“How do you know the skeleton is female?”

“I could tell by the bits of rotting clothing, such as pieces of a lacy blouse. Also, there are items of female jewelry among the bones.”

“I see. Can you go with me later today?”

“I guess so. Do you want me to meet you at your house?”

“I’ll have to call you back because I’m the only deputy on duty right now. Barney has the day off.” I referred to my work partner, Deputy Barney George.

“What about the new guy?”

“Buster’s attending a training in Alpine. Also, I’m sure the sheriff will want to go with us.”

“Craig, he’s a fair man who has no ill will towards you.”

“If the sheriff goes, then you don’t need me. I can tell you how to get there. You’d better write this down.”

He gave me complicated directions to a place I felt sure I’d never been before, just a few miles past the middle of nowhere, but before you reach god-knows-where.

I left a message for Sheriff Ben saying that a human skeleton had been found in a shack on Terlingua Ranch. I would await his instructions.

Why was there a skeleton above ground in my county? How did it get there and when? Was it foul play, an accident, or a death from natural causes? How was it possible that no one had discovered it before now?

In my ongoing quest to make sense of stuff that doesn’t make sense, I returned to staring out the window at Cactus Hill. A red-tailed hawk surveyed the scene from a fractured boulder halfway up the incline. Regal in her pose, she possessed the calm demeanor of a hunter.

Before long, the front door opened and the smell of rain blew in. I jumped to my feet because I didn’t want to appear to be doing nothing. Al contrario, I was nearly sweating from the intensity of the work going on in my head.

“Papi!” I rushed to hug my father.

“Sientate, Papi.” I invited him to sit in the chair with a view.

I perched on the edge of my desk, and for a moment we watched the wind fling dust and dirt at the window. Menacing clouds swept over the huge chunk of red rock at the crest of my hill.

“I think it’s going to rain,” I said, though they were wasted words. Our weather does what it wants or, as Papi likes to say, “Es muy cabrón.”

I gave him a questioning look. “Que pasa?”

“I want to talk to you about that handsome young man.”

“Which handsome young man would that be?”

“Mija, you know which one.” My papi has a hundred different ways of saying “Mija.” With a slight change in inflection, he can say I’m the best daughter ever or possibly, the worst. He used the exasperated “Mija.”

“I refer to the good-looking Texas Ranger who spent the night at your house.”

“Hold on. No Texas Ranger has ever spent the night at my house, good-looking or otherwise.”

Papi looked disgusted. “Don’t be difficult, Mija. You know the man I’m talking about. You rode onto the McFarley Ranch with him.”

“Lennon Camacho is his name, and he did not spend the night.”

“What kind of name is Lennon?”

“He was named after John Lennon of the Beatles.”

My papi shrugged. He had no idea who or what the Beatles were and it wasn’t worth trying to explain. My mom once spent an hour explaining the phenomenon of Elvis Presley, and he still doesn’t have a clue.

“I’ve never heard of him.” My father dismissed the legendary John Lennon in his aggravating way. If Papi hadn’t heard of him, he didn’t exist. “What kind of name is that for a Mexican man?”

“He’s an American man, Papi, of Mexican descent. I guess his parents admired John Lennon or at least they liked the name. Anyway, what is your point?”

“I don’t want you to marry a Texas Ranger.”

He can say the most ridiculous things.

“First, Len and I are friends. Only. Second, what is your problem with the Rangers? Is this about Zeke?” My father by birth is a Texas Ranger in Austin. Papi, the man who raised me, can sometimes get snarly about Zeke, who came on the scene only recently. Papi has been my father since before I was born. He doesn’t have a thing to worry about. Nobody could ever replace him.