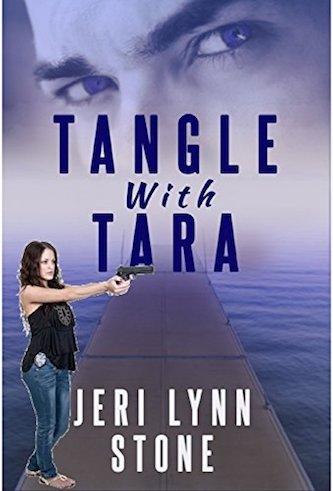 A horrifying murder of young, beautiful girls directs the detectives to a case of missing teens.

Tangle with Tara by Jeri Lynn Stone has received the Best in Texas Book Award for Detective Crime Book. The award is presented by the Texas Association of Authors.

Relentless New York Detective Tara Woods and her partner are about to face the worst nightmare of their careers. A horrifying murder of young, beautiful girls directs the detectives to a case of missing teens.

When a case of teenage girls being kidnapped and held captive hits too close to home, Detective Tara Woods and her partner investigate and links the victims of the murder and kidnapped cases together.

One by one, innocent girls living within a five-mile radius of Tara’s apartment come up missing. Then, the creep snatched her friend’s teenage daughter who lived next door.

Game on. He tangled with the wrong person.

The young girls whimpered. Six of them cowered side by side, bound with quarter-inch chains secured to the wall, and looked at Detective Tara Woods with tormented eyes. Eyes that had seen the worst kind of hell, a nightmarish hell that would burn in their memories for the rest of their lives.

Tara whispered into the radio to her partner. “Dobbs, get your tail down here. I’ve found them.” Thankful these girls hadn’t met the same horrific fate of the two young bodies now laying in the morgue, she positioned her gun in front of her. She beamed her flashlight around the dark and dank basement that smelled of feces and stale air.

A large rat scampered across the dirty floor in front of her. She clamped a shaky hand over her mouth to keep from screaming. Damn, she hated rats almost as much as she hated sick bastards who preyed on young girls.

Dobbs gave the “all clear” signal and she relaxed. With all units hidden outside the mid-fifties style home, they would lay in wait until the sicko returned. And, she would do everything in her power to make sure he never hurt an innocent, again.

Tara turned back to face the poor girls and took the horrendous scene in further. Dirty, blue plastic dog bowls full of food scraps sat on the floor in front of each one. Evidently, the girls’ lunch. She put on a glove and reached down to pick up one for forensic. Flies swarmed her hand. Her stomach churned. But, she’d seen much worse.

The bowl was still warm.

Warm? Her hand went to her gun.

With her flashlight beaming and her pistol drawn, her sharp gaze searched the deepest corners of the basement. Shadows bounced off the wall from the furnace and shelves, but no other soul was in the room other than her and the girls.

Damn it to hell, they had just missed him. How? She’d had men stationed around the neglected, two-story home thirty minutes before they’d entered the premises. There’s no way he could’ve gotten past them.

She felt a chill run down her spine.

She turned to Dobbs as he came down the short, narrow stairs. “He’s still here. The food’s still warm. Just poured in.”

Detective Matt Dobbs rubbed the stubble of blonde hair on his head. “Can’t be. We searched the place top to bottom and every room. We came up empty.”

Tara turned away knowing Dobbs trusted her instincts well enough to not question her. His shoes pounded back up the stairs as he shouted orders. They would search again. And, again if they had to before they captured him.

She replaced her pistol and knelt in front of the first girl, who didn’t look to be more than twelve or thirteen. The girl shrank back as far as her chains allowed. She drew herself up into a tight ball. Her chest heaved with harsh breaths and sobs. Tears left curvy roads down her dirt-ridden cheeks.

“Honey, it’s okay. Sh…, it’s okay. I’m Detective Tara Woods. Everyone is safe now.” God, she hoped she was telling the truth. Tara let her gaze follow the chain until she saw the padlock and cursed. She got on her radio and requested a heavy-duty chain cutter from her unit outside. Just a few more minutes and the girls would be free. She’d get them out of this hell hole.

“Can you tell me your name, honey?”

The young girl with dirty, matted, blonde hair and dark bruises showing through the rips in her tattered, bloody clothing nodded. Through swollen and cut lips, her voice raspy, she answered. “Sara.”

Tara gripped the girl’s trembling hand and smiled to sooth her fear. Sara, she remembered, was the first girl who’d gone missing six weeks earlier. Then, for each week afterwards, another had disappeared. Twelve-year-old Beth. Then Amy, Susan, Paige and now Toni. All in their early teens.

Fresh. Innocent. But, no longer.

And, no clues found to help their case.

Until, the lousy pervert made the biggest mistake of his sorry life when security cameras captured him watching little Toni ride her bicycle out of a convenience store parking lot not far from Tara’s own apartment. The tape showed him approach Toni, and with a grown-up strength, he grabbed her by one arm. While she fought for her life, he pulled her into an older model, dark-blue van. Pitching the bike into the ditch by the roadside, he sped off into the night, out of sight.

No fingerprints except the child’s were found on the bike. The camera’s pictures were fuzzy, but they were able to get part of the New York license plate number. Melinda, their young and energetic computer guru, ran a match on the numbers which led them to a stolen vehicle. No surprise there.

Working with the local officers patrolling the areas where Toni and the other five girls were snatched, they realized that all of the victims lived within a five mile radius. Included in the radius were two unsolved murdered victims around the same age as the missing.

A little before midnight on Monday, the cops spotted the van parked on the street four miles away at this rundown address in a neighborhood where only crack heads, prostitutes and lowlifes lived. Tara and Dobbs made it there within minutes after they received the call.

Hearing a whimper, Tara turned her attention back to the girls as she waited for Dobbs to return. She wanted to scream. She wanted to make things right for them, to turn back time to when they were safe.

She wanted to kill.

Only the badge inside her pocket kept her from hunting the sick bastard down and putting a bullet between his eyes. But, he would pay his dues.

She would make certain of it.

The girls would need professional help later and for months and years to come, but for now, more importantly, they needed to believe they were safe from the monster who’d raped and abused them physically and mentally.

After a visit to the hospital the teens and their parents would be taken to the 13th precinct headquarters where the girls would be questioned while things were still fresh in their minds. They would finally be released to continue on with their wrecked life.

And then, their nightmares would begin.