Ghost, spirit guides, serial killer’s, the mob and more are tightly woven into a read that is brilliant.

As far as Peg Shaw is concerned, midlife and menopause have brought enough sweat and excitement to last a lifetime. Unfortunately, there are others who disagree. One night while stumbling back to bed from her nightly visit to the bathroom, Peg is stopped in her tracks by two women standing in her bedroom.

As her husband sleeps soundly, Peg abruptly realizes that ghosts have come calling: one is her dead grandmother and the other is her spirit guide.

After her grandmother asks her to partner with other spirits to help law enforcement solve crimes, Peg reluctantly agrees to help bring justice to the deceased but persistent ghosts of a local couple.

After Peg discovers that cold cases are much more difficult to eliminate than her hot flashes, she travels into unfamiliar territory where her inexperience with murder becomes no match for her determination to rid herself of her uninvited, heartbeat-less guests.

After enlisting help from old friends and unexpected allies, Peg uncovers a dark secret at the heart of her sleepy township with the potential to bring more trouble than she bargained for.

In this paranormal adventure tale, a middle-aged woman in the throes of menopause is thrust into solving local crimes, with help from her new friends from Deadsville. 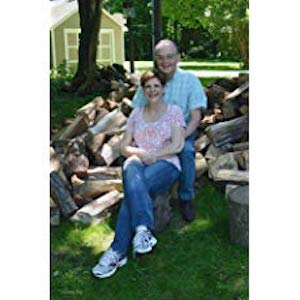 Author Sue Hawley proves that writers become writers by reading. With little formal writing instruction but years of avid reading, Sue Hawley began writing a series of cozy mysteries. Her stories surround the adventures of menopausal Peg Shaw who sees dead people. “The first one almost wrote itself,” Sue said of Hot Flashes Cold Cases, which she wrote in 12 weeks. “My sister, who is now my biggest fan, loved it.”

When asked where she gets her ideas, Sue explained, “Characters show up when they are ready. It’s not something that can be forced.” She goes on to say “One day I was writing about Peg when a character showed up ringing the doorbell. I had no idea who was going to be on the other side of that door when Peg answered it. It turned out to be Amy, someone who has been important to Peg ever since.”

While in her early twenties, Sue met her husband Jack through her oldest sister. After a brief engagement, they were married and moved into Jack’s family home, built by his great-grandfather. They are the fifth generation to live in the farmhouse, dating back to the 1800s. Many renovations to the old farmhouse, five children and eleven grandchildren later, they are still going strong.

What a wonderful find. A terrific plot that keeps you guessing and characters that are as real as you or I. Reaching the menopause is no joke as every woman of a certain age knows.

However when you start seeing ghosts as well, well that takes the biscuit. Not only seeing ghosts but being charged with acting for them in bringing their killers to justice.

Ghost, spirit guides, serial killer’s, the mob and more are tightly woven into a read that is brilliant. Regardless of how you like your cozies, filled with supernatural or not, this will be one of your favourites as it has everything.

A plot that is riveting and great characters.