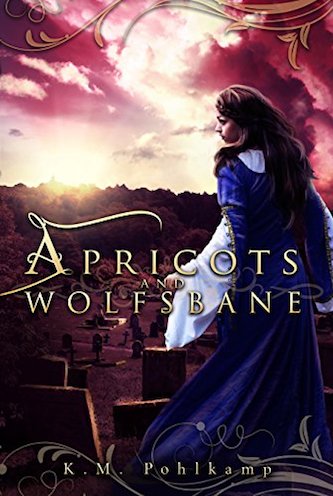 Lavinia must decide which will satisfy her heart: love, faith, or murder–but the betrayals are just beginning.

Apricots and Wolfsbane by K. M. Pohlkamp has received the Best in Texas Book Award for Historical Tudor Book. The award is presented by the Texas Association of Authors.

Lavinia Maud craves the moment the last wisps of life leave her victims’ bodies–to behold the effects of her own poison creations. Believing confession erases the sin of murder, her morbid desires are in unity with faith, though she could never justify her skill to the magistrate she loves.

At the start of the 16th century in Tudor England, Lavinia’s marks grow from tavern drunks to nobility, but rising prestige brings increased risk. When the magistrate suspects her ruse, he pressures the priest into breaking her confessional seal, pitting Lavinia’s instincts as an assassin against the tenets of love and faith. She balances revenge with her struggle to develop a tasteless poison and avoid the wrath of her ruthless patron.

With her ideals in conflict, Lavinia must decide which will satisfy her heart: love, faith, or murder–but the betrayals are just beginning.

The violent display of convulsions lasted longer than I anticipated.

With my boots propped on the table, I remember watching beads of wax roll down the candle, marking time between my victim’s spasms. The brothel room was sparse, and the bed in the corner remained undisturbed. I had assumed the role of temptress that evening, but delivered a different climax.

I savored the fear on my victim’s face as much as my own unlaced mead. The sweetness of both danced on my palate. His repulsive gagging, however, I endured with patience.

My target focused upon me. His hand shook, reaching out in a misplaced plea for aid. Instead, I raised my goblet in a final toast while he turned purple. He glanced towards his spilled glass, and then studied my face with new understanding. With his last remnants of life, he pieced together what I had done. Those little moments made the act so delicious. And as his body collapsed upon the floor, I added one more success to my mental tally.

The scratching of my chair sliding across the uneven floor broke the sudden, serene silence of the room. Driven by curiosity, my boots echoed with each step towards my victim.

The man’s eyes contained a lingering remnant of vibrancy despite the departure of the soul they once served. White froth percolated from his open mouth, overflowing the orifice to trail down his neck. It was not an honorable death, but my client had paid for certainty, not dignity.

Curious, I examined the large ruby on the victim’s pointer finger which matched the client’s description — an ornate setting with a coat of arms on one side of the gem and a mare’s head on the opposite. The worked piece of silver did not seem important enough to procure my service, but as a professional, I had not asked for justification, only payment. Material significance so often motivated patrons to fill my coffers. I recognized the inherent sin, but I never judged a client’s reason. I was not qualified to cast the first stone.

I did admire my victim. After all, he was a fellow criminal. I believed his talents as a thief must have been remarkable to pilfer the ring unnoticed from the finger of its owner. I often boasted of my own sleight of hand, but admittedly, I could not accomplish such a feat. Though in my defense, assassin clearly trumped thief.

After donning the black leather gloves concealed within the lacings of my bodice, I returned to business. I pushed the tipped chair out of the way and pulled on the ring, but my motion abruptly halted.

Caught at the knuckle, the gem did not budge.

I stared at his limp hand, dumbfounded, before a flame of focus burst through my body. How I craved and savored that rush. That high, and the feeling of power motivated my ghastly craft all those years. Despite the stress, I never lost control of my emotions on the job. No matter the circumstance, I learned to remain calm and reason through any dilemma. That night was no different.

Grabbing the corpse’s wrist in one hand, I pulled on the metal band with all my strength. Still, the damn ring did not move, even with my heel braced against his chest. But through the sound of my grunting, the unexpected scratching of a nearby rat interrupted my efforts.

The rodent stood tall on his hind legs, observing the entertainment outside his hole in the floorboard. What else could I do except laugh in amusement? There was something poetic about the meager creature being the singular witness to the growing farce, while beyond the chamber door, an entire brothel remained unaware.

But their ignorance would not last for long.

By God’s nails, I was not going to degrade myself to play tug of war with a corpse, nor disgrace my spit to serve as lubrication. I retrieved the dagger from my boot and sawed through the bone of the blasted digit. In contrast, his purse strings cut with ease and the contained sum gave me confidence the proprietor would retain his promised discretion. Eager to depart, I cleansed the ring with the pure decanter of mead and left the contaminated gloves on the table.

I threw the finger to the rat.

Sheathing the dagger in the waist of my skirt, I returned to the main hall where boisterous music assaulted my ears, accompanied by drunken laughter. I added a meager sigh to the noise, surveying the sweaty, depraved crowd between me and the door. My eyes had long grown accustomed to the salacious activities occurring in every direction, but the obscene filth still violated my morals. Keeping my head down, I managed to pass through the horde without gagging before one wandering hand grasped my rear. After a quick flash of my dagger, the drunkard relented. I longed to add to the rat’s dinner, but still on the job, I could not afford a confrontation.

Humanity is a self-absorbed species. Throughout my career, I exploited that trait. The truth allowed me to disregard the number of potential witnesses within the brothel. No one would remember a plain maiden come morning and only the stewsman knew what occurred in the backroom. He smiled when he caught my glance. I gave the coin purse a gentle toss in his direction, glad the mess was now his problem. After retrieving my cloak from the hook by the door, I departed into the vacant streets of Marfield, knowing where I must go.

The air smelled of fresh rain, and above, grey clouds thinned. In my haste, my boot splashed into a puddle, wavering the moon’s reflection on the surface and soaking the hem of my skirt. I did not care. The percussive rhythm of water dripping from rooftops paired with my excited footsteps over the cobblestones.

Ahead, a man lighting a lantern paused to behold my figure. I supposed I was dressed for entrapment. My sleeveless bodice was pulled low and tied tight, pushing up my bosom — and I had not worn a chemise underneath. The crimson ensemble complemented my brown hair left loose. I could sustain the role for the sake of the kill, but I would not indulge a bystander. Wrapping the cloak tight around my torso, I glared back as I passed.

The garment’s velvet enveloped me in a familiar embrace of comfort. My father gifted the cloak not one year before he passed through the Celestial Gates. It was the olive color of wet moss, custom dyed to match my eyes. My marks often told me my irises sparkled like jewels, but those men were not the most poetic or astute. They all became unwilling test subjects with only one means to satisfy my desire. My smile broadened, recalling how well the thief had played his part.

But the sight of the looming church steeple subdued my arrogance in the space of a breath. A gust of cold wind conquered my excitement-induced sweat, and the call of the cross beckoned my heart. My conscience burned with the debt of transgression. I craved dispensation with every bone in my body and the complete essence of my soul. The sacred pilgrimage was the necessary second half of my routine and the singular act that kept me grounded all those years.

Entering the church sent needles into my back. An empty nave, especially at night, always humbled my heart. It was the result of intimacy, the crushing awareness of being alone within the House of God. Behind the far altar, His Lord’s likeness gazed down upon me from the marble crucifix. For a moment, I swore the ruby ring around my thumb burned, challenging my gall for the first time that evening.

Reminded of my guilt, my gut threatened to collapse inward, but I endured, knowing internal peace was moments away. With a deep breath, I permitted the lingering, sweet essence of frankincense to burrow into my lungs; the woody aroma enveloped me in reassurance. Exhaling, I turned towards the confessional, ignoring the ominous aura of the surrounding statues cast within shadow. Their hard, grey eyes also glared upon me in judgment. I never claimed to be as pious as those Saints, but there are murderers amongst their ranks. St. Vladimir, for example. If the Church forgave him for slaying his brother and raping his sister-in-law, surely God had room for a poison master.

Closing the confessional door, I knelt before the wicker screen dividing the small, unlit chamber, and made the sign of the cross.

“Forgive me, Father, for I have sinned.”