Best of Texas Book Award for Family Life Book: The Eyes of the Doe by Patricia Taylor Wells 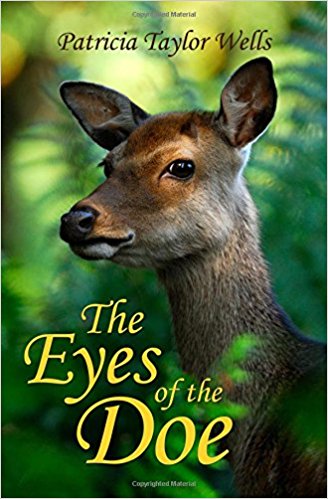 Against a backdrop of local and worldwide turbulence, a family’s once close ties become fragmented.

The Eyes of the Doe by Patricia Taylor Wells has received the Best in Texas Book Award for Family Life Book. The award is presented by the Texas Association of Authors.

“Ever since the day she was born, she could aggravate me one moment, then leave me feeling ashamed for not being a better mother the very next. She simply wants more and needs more than I ever have to give her.”

In 1963, Holly Hendricks and her family moved from the small East Texas town where they have strong family roots to the impersonal city of Dallas.

Against a backdrop of local and worldwide turbulence, their once close ties are fragmented.

Fourteen-year-old Holly returns to the small town to stay with her Grandma as she tries to cope with the loss of her brother.

Sampler from Chapter One:

SOMETIMES IT SEEMS that each year renders the same mean destiny as the one before, like a wound that won’t quite heal or a door that won’t slam shut no matter how hard I push against it. There never has been much happiness in the world. All I do is struggle to make ends meet and put up with kids who, half the time, are more of a burden than a blessing, especially Holly. Ever since the day she was born, she could aggravate me one moment, then leave me feeling ashamed for not being a better mother the very next. She simply wants more and needs more than I ever have to give her. Even in the womb, she was insufferable; kicking my insides out every restful second and putting me through eighteen hours of labor on one of the hottest days ever recorded in East Texas. All I had to show for it was a scrawny, baldheaded, red-faced screaming daughter. There, I finally said it. Now I would spend the rest of my day trying to make amends. I would buy Holly a new set of paper dolls or let her tear out the Betsy McCall page as soon as my new magazine arrived. I might even sit down with her while she drew a picture and tell her she was sure to make an artist.

Holly’s older sister was born eight months after Ross shipped out overseas, somewhere in the Pacific. He made it clear in every letter he wrote home how badly he wanted a son. I was sure once he saw Kathleen he would feel differently. But fighting a war had left Ross too moody and restless, too willing to find comfort from a pint of Jim Beam, to notice what a beautiful baby girl I had given him.

The war had taken its toll on me, too; what with trying to raise a child all alone, wondering how I was going to pay all the bills and worrying whether my husband would come back in one piece. But I never used any of that as an excuse for chucking my responsibilities.

Kathleen was almost seven when I got pregnant with Holly. Ross eagerly awaited the birth of a son, just like he had done when I was carrying Kathleen. He didn’t even try to hide his disappointment when he learned his second child was also a girl.

Holly was still in her crib when Jake was born. Ross may have gotten his wish for a son, but for me each waking moment was spent taking care of an infant and toddler still in diapers. To make matters worse, every time Ross held Jake in his arms, Holly would throw a tantrum, crinkling her face like an old man’s as she squatted at his feet, screaming and kicking, then hitting her balled fists against the floor before sprawling out in front of him like a jilted lover. It wasn’t until Holly came down with polio, right before her second birthday, that Ross paid her any attention. From then on, he gave in to everything she wanted.

I was the one who had to deal with Holly’s bad leg and temper. She was different from all the other children her age and she knew it.

“Don’t make me!” she screamed each time I tried to put the brace on her leg.

“You know you can’t walk without it. Besides, you’re not the only child with polio, you know.”

“I don’t want to hear any more. Just be glad you didn’t end up in an iron lung. Now hurry up before I give you something else to cry about.”

One morning Holly grabbed the brace and threw it against the wall, tearing a hole through the plaster. The day before her Aunt Martha and her cousin Nick had stopped by. Holly, Jake, and Nick were running around the backyard like wild Indians. The two boys had taken off their shirts and were tossing a ball to one another while Holly did her best to snatch it from them. She was no match for her brother and cousin and soon plopped down on the grass, emptying her pockets of the pebbles she had gathered earlier and throwing them at the boys for not letting her have the ball.

“Poor child.” Martha didn’t even lower her voice as she spoke to me. “She’ll probably never marry. You know what I mean, with her leg and all.”

“What a fool thing to say about a six year old,” I said. “Holly has a pretty face and that will more than make up for her bad leg.”

“Well, I wouldn’t tell her she was pretty if I were you. That way, she won’t be disappointed when men notice she’s a cripple and look the other way.” Martha pursed her lips, the way she always did when she wanted to make a point.

I felt guilty for having thought the same thing myself. Although I worried how Holly would handle being labeled a cripple, it only fueled her doggedness to prove Aunt Martha wrong. She worked hard to build her strength so one day she could walk without her brace and took extra pains to disguise her lameness.

Despite having polio, Holly pestered me constantly to let her take ballet lessons like her cousin Caroline, who was a year older and had two good legs to dance on. Holly would never walk on her toes any more than she would fly to the moon. Why God had given me a child who always wanted what she couldn’t have, most of which was utter nonsense, was beyond me. Her fixation on being a ballerina was soon replaced with wanting an apple tree like the one she had seen in some book. I blamed Ross for that. He’s the one who told her she could have anything she wanted if she waited long enough and thought hard enough about it. I don’t know why he had to give her such false hope.

The day this all started was so scorching hot and humid I had to mop my neck repeatedly with a damp dish cloth. Beads of moisture formed on every surface. A small fan droned as it swung back and forth in its battle to stir the unforgiving air. I heard utensils rattling in the drawer behind me and turned as Holly grabbed a large serving spoon and tried to hide it under her cotton shirt. She slid out the screen door before I could stop her.

“Just where do you think you’re going, Holly Hendricks?” I hollered after her. “You’re not going to take my good spoon out there in the yard!”

“You know better than to run around like that on your bad leg. You’ll have to wear your brace again if you’re not careful.” It was too hot to chase after her. All I could do was keep a close watch as she ran toward the chain link fence that separated our backyard and pasture.

Holly, safely out of calling range, crouched down next to the dark pink blooms climbing the fence like a floral barbed wire waiting to prick the living daylights out of anyone who brushed up against it. I tried calling her again, but she couldn’t hear me.

The best I could tell, Holly was digging little holes with my spoon. I had a good mind to go out there and snatch it from her. She knew better than to tear up my garden after all the time I had spent pruning, mulching, and nurturing my beautiful Tyler roses, which were not only pretty to look at but also provided an alluring feast for the forager bees Ross kept in the pasture.

Earlier that morning, I noticed the apple seeds Holly had placed on the windowsill to dry were missing. Later I saw her untie one of my handkerchiefs and look at the little pile of seeds she had wrapped inside it.

“You ought to throw those seeds away,” I grumbled.

“I’m going to plant them,” she argued.

“Well, you’re wasting your time if you ask me. Apple trees don’t grow around here. Not in this kind of soil and climate.”

Holly retied the handkerchief and stuffed it in her pocket. She walked out of the room like she hadn’t heard a word I said. I don’t know how she got to be so stubborn. Kathleen always yielded to a strong voice and Jake never caused any fuss in the first place. For whatever reason, Holly wanted an apple tree and no amount of coaxing could change her mind. Well, she didn’t get that kind of thinking from me. That was Ross’s doing. I had been burdened enough with all this foolishness. Ross would have to deal with her, not me, when those seeds of hers refused to sprout.

Please click HERE to purchase The Eyes of the Doe from Texas Authors.