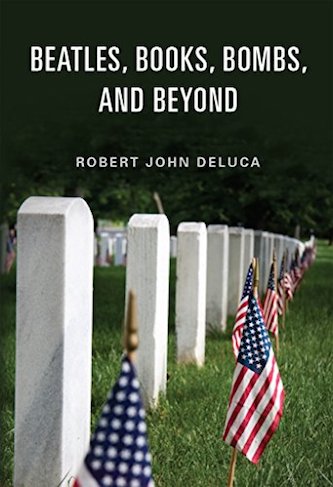 The Vietnam catastrophe mushrooms out of nowhere into the most divisive issue of the century.

Beatles, Books, Bombs and Beyond by Robert John DeLuca has received the Best in Texas Book Award for Memoir. The award is presented by the Texas Association of Authors.

Who knew that the 1960’s would be so weird? This book is the true story of three bright young men who eagerly enter Brown University in 1962, filled with hopes and dreams but with no inkling what is in store over the turbulent decade ahead.

They all have earned full Navy ROTC scholarships and look forward to serving their country in uniform when they graduate. In fact, they sign up to be United States Marine Corps officers. An inconceivable succession of world and national events dramatically transform the nation from a society rooted in conformity and comfortable conservatism into one impregnated with new found skepticism and liberalism.

There is no place where these ideas take hold more quickly than on the college campuses.

The Vietnam catastrophe mushrooms out of nowhere into the most divisive issue of the century. The three struggle to swim against the flood tide of anti-establishment and anti-military sentiment. Yet, they remain steadfast in their conviction to answer their country’s call.

They are fun-loving, serious, naive, immature, and yet mostly dependable, all in one package. They study, play sports, party, drink beer, chase girls, horse around, fall in love, graduate, get married, have kids, and go off to war.

This story recounts college life, fast friendships, and boys becoming men. There is plenty of humor, love, determination, and rambunctious adventure, even as it becomes clear that the ugly cloud of Vietnam is destined to seize their lives after graduation.

After graduation on 6/6/66, with gold USMC second lieutenant bars pinned on their collars, they march off to infantry officer training in Virginia. It is a bittersweet time as new marriages struggle to coalesce despite the terrifying separation which is imminent. One goes to Vietnam and returns home before the other two, who have trained to become fighter pilots, join squadrons in DaNang.

Astonishingly, despite overwhelming personal sacrifice, they still must endure catcalls and blatant disrespect from the very people at home whose freedom they are committed to ensure.

Dreadfully, the pilots never return and perish in the cockpits of their spectacular war machines over the jungles and seas of Vietnam, resolutely carrying out their assigned missions in that God-forsaken place. Never does their resolve and commitment to duty waiver.

Was this horrible price worth it? That dilemma has taken a half-century to contemplate.