Best of Texas Book Award for Autobiography Inspirational Book: He Knows the Plan by Chenda Tom 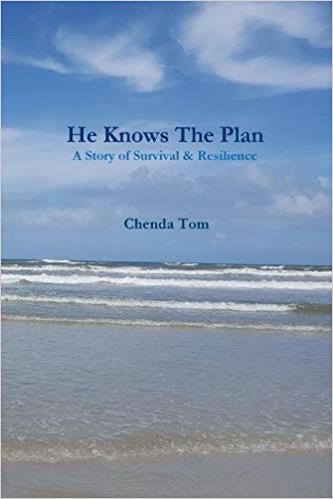 His kindness showed that not all Khmer Rouge followers wanted to mistreat and kill.

He Knows the Plan by Chenda Tom has received the Best in Texas Book Award for Autobiography Inspirational Book. The award is presented by the Texas Association of Authors.

For many years, the Khmer Rouge, a communist regime, had been training soldiers in the forest and creating an army to take over the country of Cambodia. On April 17, 1975, the Khmer Rouge paraded through Phnom Penh, the capital, to exterminate the city of “bugs”.

People were first told that they would temporarily have to leave their homes for three days. Some of the adults knew better than to believe this story because rumors had been spreading all over Cambodia about the terrible things occurring in villages and towns. People from the villages and towns had been coming into Phnom Penh and living in parks or any open area in the capital because their homes were taken over or destroyed by the Khmer Rouge soldiers.

Cambodia was a peaceful and self-sufficient country, full of people who only desired peace. We came to believe the propaganda being told because there was not an alternate option. Questions became fears, fears turned into belief that the Khmer Rouge soldiers would protect us.

By this time, my father had known that my mother and sister had died. His mother also passed.  He did not know where I was taken.  He was just a man going about life doing what he was told. He had nothing else to lose because his wife and children were gone.  He barely knew where his sisters and brother were located.

One of the turning points in my life occurred when my father drove his ox cart across my path one unassuming morning. In the orphanage, children of every age had jobs.  That morning, along with about 10 to 12 other children, we marched into the forest to gather twigs.  We were guarded by young soldiers, between the ages of 11 and 13 years old.  Imagine a group of young elementary students walking in a straight line being guarded by soldiers instead of teachers, instead of a hallway within a school, we were in the middle of a field with the forest as walls.

As we were marching into the forest to collect firewood, here comes a line of men driving ox carts heading into the forest.  I look out and see a man who looks like my father.  He motions the ox to come to a stop as he looks at the line of children.  A thought must have passed through his mind hoping that one of the children could be his daughter.  Our eyes locked, I see my father and he sees me.  We must have experienced a moment of joy like nothing else.

As my father looks at the young soldiers, daring them to shoot us, I run out of line toward him risking death for both of us.  I run under the belly of the ox as my father reaches down, lifts me up, and sits me next to him.  I barely noticed the size of the animal, the barrel of the guns, or the sweat of his hand as my father leant down to grab my arm.

The young soldiers were so taken back by my disobedience that it took them a minute to respond in anger.  We had nothing else to lose if they had chosen to shoot us that morning. Being dead would have been better than the continued suffering.  They did not shoot us, because we were not worth wasting their bullets.

They were trying to save bullets for the fight that was coming. The South Vietnamese soldiers were getting closer.  It is now 1979.

My father drove the ox cart into the forest with his group, but this time with his daughter.  My destiny was not to die in the orphanage within the forest because my father found me.

Living in the forest with my father was the best time spent with him during those horrible years.  We went fishing and hunting for food.  We slept in the forest and enjoyed the peace and quiet. I can still picture a man and his daughter hovering over a small fire keeping warm and anticipating a good meal. Those few days with my father lasted a lifetime.  I still can picture the two of us in the forest happy to be together.  This is a positive memory in the middle of a nightmare.

After my father completed his tasks to chop firewood in the forest and deliver them to different camps.  We returned to his camp.  He begged his camp leader to allow me to stay with him.  The camp leader found sympathy for us because he lost his wife and had a young daughter my age.  We were able to eat real food again since everyone shared. The camp leader was a reasonable and kind man.  His kindness showed that not all Khmer Rouge followers wanted to mistreat and kill.  They were Cambodians too.

It might have been at this camp that the second nail of my right toe became infected, filled with yellow puss.  Since there were no doctors or hospitals, my father yanked the toenail to clear out the infection.  I could walk without pain after the toe healed.  There were no antibiotics or medicine.  The deformed nail reminds me of how fortunate I am to be alive.

Please click HERE to purchase He Knows the Plan from Texas Authors.