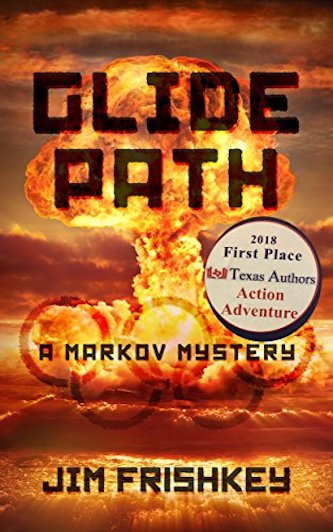 Will he risk his life to save the country that abandoned him?

Glide Path by Jim Frishkey has received the Best in Texas Book Award for Action Adventure Book. The award is presented by the Texas Association of Authors. 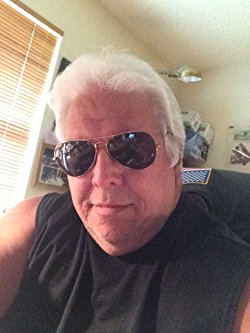 In late 1945, a B-29 carrying the first Hydrogen bomb is sent on a secret mission to destroy the Russian city of Sochi. Truman wanted to send a message to Stalin that the U.S. had the power to destroy any adversary in hopes that the Soviets would halt their expansion plans in post-war Europe.

A sudden storm forces the plane to crash in the Black Sea where it sits with its deadly cargo for almost 70 years. In early 2014 a scientific submarine exploring marine life stumbles upon the wreckage of the plane and its location finds its way to the ISIS faction in Crimea.

Having a nuclear weapon lying at his feet, Al-Baghdadi plots to detonate it during the Sochi Olympics. An aging ex-KGB agent attending the winter games is drawn into the maze and is the only person with a chance to thwart the terrorists. Will he risk his life to save the country that abandoned him?

Major Robert Lewis stood in front of the mirror, admiring the gold oak leafs that were now a part of his uniform.  After the success of the Hiroshima attack, he was promoted from Captain and promised another important assignment.  He was the co-pilot of the Enola Gay on that fateful day that effectively ended the war.

The aftermath of the event was a whirlwind of excitement for the young officer.  He was allowed a brief respite and met his wife at Pearl Harbor for a few days before receiving his new orders.  He was to report to Lakenheath immediately and await further orders.  That was it.

When he arrived in England he was met by two former OSS agents and whisked to the base in Suffolk.  No words were shared…no questions were answered.  A month earlier, President Truman announced the dissolution of the agency, however the role of an active intelligence service was not abandoned.  The War Department took over the SI and X2 Branches and consolidated their activates into a new operation…The Strategic Services Unit, led by Brigadier General John Magruder, formerly Deputy Director for Intelligence in OSS.

Safely tucked away in his quarters, Lewis was not aware of the two sentries posted by his door until General Magruder summoned him to an interrogation room across the base.  The Jeep driver said nothing and pulled up to a guard post where credentials were required to gain entry.

Once inside, he was led down several long corridors before arriving at the meeting location.  The guard knocked three times, some sort of code Lewis guessed, before the door opened and Lewis was greeted by the man he would be reporting to for the foreseeable future.

“Welcome to Jolly Old England, Major.”  Magruder was a tall thin man, 58 years old but looking in his forties.  His uniform was a billboard for decorations from both wars, including the Army Distinguished Service Medal.  Here stood a man who distinguished himself in combat and was, arguably, the most gifted intelligence officer in the military.

Lewis saluted but had no idea who he was saluting.  “Thank you General but I’m sorry I don’t recognize your face.”

“Sit down son.  My name is Magruder.  You have been chosen to be a part of my team.  I run the SSU.  Everything we discuss will be classified at the highest level.  You should be used to that after what you boys did to the Japs.”

Lewis had never heard of the SSU but there was a lot he was new to.  No point in dancing around with this guy, he decided.  “General Magruder you may have the wrong man.  I’m a pilot and the war is over.  I just want to get back home to my wife.  She’s about to deliver our first child and she needs me more than the military does.”

“Bring the rest in,” Magruder ordered to one of his aides.  Moments later the door opened and five men filed in.  Lewis immediately recognized some of the faces as crew members of the other planes that were part of the Hiroshima fleet of Silverplate B-29s.

“Jesus, Mary and Joseph, I never thought I’d see your ugly faces again,” Lewis cried out as the reunited airmen hugged each other like school kids on the playground.  In a couple of minutes, it began to sink in for all of them.  “General, can you tell us what is going on?”

“Please, all of you, take a seat.  Feel free to pour yourselves a cup of coffee.  Unfortunately, the Brits haven’t mastered the brewing art yet but you’ll get used to it.”  Each of them poured a cup and several lit a cigarette.

“Gentlemen, you have been selected for a new, incredibly important mission.  It will require all the skills you perfected dealing with the two “gadgets” that were dropped on Japan, but even more.  Tomorrow at 0700, Doctor Edward Teller will brief you with more information but, for now, I want to introduce you to your new aircraft.”

The men followed Magruder outside where two jeeps were waiting to take them to a secure area of the base.  When they arrived at the designated hangar, more security personnel were stationed, barring access unless the proper credentials were presented.  Once they recognized the General they saluted and allowed the group to enter.

The hangar was completely dark until someone accessed the light panel.  Standing before the small group was the “Necessary Evil”…one of the support planes involved in the bombing of Hiroshima.  Its metal fuselage was polished like a jewel and finding it here, thousands of miles from Tinian, was a shock that left everyone speechless…except Magruder.

“Gentlemen, you are looking at the first Silverplate B-29 designed to deliver a hydrogen-fusion device many times more powerful than “Little Boy”.  Major Lewis will be the pilot and commanding officer.  The rest of you will be his crew.  Feel free to inspect and board her.  Over the next two weeks she will become your best friend and you will know every inch of her…every squeak she makes and every system that makes her tick.  In the morning, any questions you might have will be answered.”

Lewis and his new team spent the next hour inspecting the massive bomber.  It had all the improvements that were installed on the Enola Gay plus some new hardware that Lewis could not identify.  He assumed that its range was extended but unknown without having the target location, assuming there even was a target.

Back in their quarters the crew members ate a quiet dinner, both excited and afraid about what was going to be unveiled to them in the morning. They were isolated from the rest of the base and assumed this would continue until they were told otherwise.  Each man had a dozen questions for Lewis but he was as much in the dark as they were and he told them so.  “Fellas’ each of us was picked for a reason.  Once they lay everything out for us we can decide if we want to continue or go home.  It’s that simple so get a good night’s sleep.”

At 0600 the next morning they were mustered out for a quick breakfast and driven back to the hangar where the “Necessary Evil” was parked. This time they found two rows of chairs facing a lectern and another table covered in top secret file folders. There was a projector and screen set up as well.  Once everyone was seated, General Magruder and another man stepped from behind the screen.

Magruder took the lectern. “Good morning gentlemen.  Sorry to get you up so early but there is much work to do so get used to it.  When we are finished, there is a folder here for each of you so grab it and sign for it before you leave.  Now please pay attention to the gentleman joining us this morning.  Allow me to introduce Doctor Edward Teller.  He has a Ph.D. in theoretical physics and was a critical member of the Los Alamos team that created our first atomic weapons.” You could hear a pin drop as Teller began to speak.