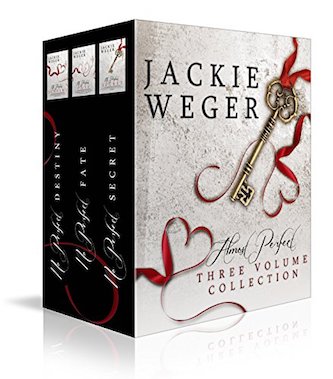 No Perfect Fate: When Cleo Anderson parks her Play-Mor in a small fish camp on the banks of the Suwannee River, her arrival draws the curious attention of eleven-year-old, Katie. Beautiful, yet shy, Cleo seems determined to avoid forming personal ties until Katie draws her into reluctant relationships with her godfather, Fletcher, and the plain-spoken elderly camp owner. Despite her reserve, Cleo soon becomes attached to the close-knit community of campers. Even as Cleo begins to overcome her reserve, she struggles with an inner voice and a past that haunts her and won’t let go.

No Perfect Secret: Betrayed thrice over by her husband, Anna believes her imploded life will right itself if only she buys a dog. Investigator Frank Caburn has other ideas. He already owns a dog. Man to the bone and manufacturing testosterone like Frito Lay does chips, all he wants is to fall in love and be done with it. Anna Nesmith is the one. But how to tell her without tripping over a layer of secrets is beyond him. Adding to Caburn’s woe are his elderly bosses–both of whom who plan to keep their jobs until the Rapture or the sun burns out–whichever comes last, a cross-dressing dominatrix with OCD, a purple-haired hacker on parole, and Anna’s back-stabbing mother-in-law. Falling in love has never been more difficult.

No Perfect Destiny: Leah Spencer lives in the present until a past she has outrun imperils her future. An investigation into missing funds at work threatens all she holds dear. Detective Leo Garvey has her in his sights as the number one suspect and more. Leah knows she must be careful, that nothing good could come from Leo’s attraction. Leo doesn’t see it her way. If he proves her guilty, he loses. If innocent, he wins. Yet, convincing Leah the past can only be escaped by embracing something better seems to fall on deaf ears. While Leo works to uncover the truth, Leah determines it will never surface.

The Almost Perfect 3 book Box series is a good series to get lost in. Each story can stand alone, as each is a story in itself, with a complete ending, not letting you dangle and wonder what happened.

The author is true to her words about her style of writing. She’s not fluffy with description’s, sows the story enough to bring you in, and tap your emotions. The sex scenes say enough, that you appreciate the intimacy, feel the emotion, without the cringing blow, by blow, fly speck descriptions.

This is a book series with 3 different women, dealing with what they’ve dealt with in their life, to get them to find their strengths and weaknesses, and men that are good men, that most any woman would love to find.

The stories are good reads, that you come away learning a little about yourself…at least I did. I’ll keep on the outlook for more from MS Weger.

Have to say Jackie Weger is my new favorite writer.

No Perfect Fate is about a woman who grew up traumatized by a hateful old woman who happened to be her grandmother. When Gram dies, she decides to travel. On the road, she becomes involved with a family who has a dying daughter that teaches all how to live their lives every day.

The Perfect Destiny is about a woman trying to guard her children against her ex-husband and ex-mother-in-law. All of this because her husband didn’t believe in her innocence when her boss said she stole money. It happens again in another town only this she has a cop that stands behind her and proves her innocence.

The Perfect Secret is about a young and naive woman who was married to a con man that married or had a fake marriage to other women and used all of them for their money and how she got her life and name back with the help of the U.S. State Department and many friends she met early on in the book.