What does Agatha Christie say about writing? 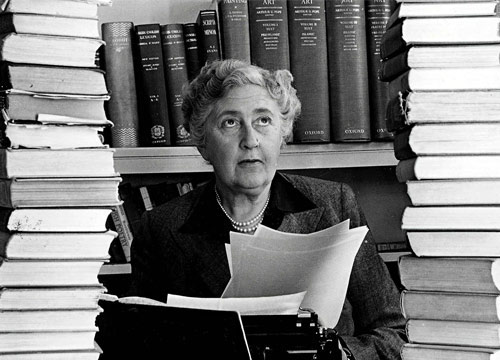 She wrote the first and last chapters on the same day because she did not want anything to disrupt her train of thought.

For Agatha Christi, beginning a new novel, she said, was three or four weeks of agony, pain, and despair, a period when she could not force herself to write a single word. She said it was like being possessed with paralyzed hopelessness.

In her first novel, she wanted to base her murderer on an acquaintance but found she couldn’t. She said that not even in her imagination could she envision him ever murdering anyone. So she kept her notebooks close at hand and wrote down descriptions of characters by watching people in trams, trains, and restaurants. Everyone was a potential murderer. Everyone was a potential victim.

Agatha wrote with simple, every day language, and she relied heavily on dialogue. Plots, she pointed out, just came to her in the oddest of places, usually out of the blue, and would rattle around in her head for long periods of time. As she said, it was always quite strange to “feel a book growing inside of you, building up all of the time.”

The Absent Spring, for example, settled in in her head for almost seven years and then suddenly fell into the place. She wrote the first and last chapters on the same day because she did not want anything to disrupt her train of thought. She sat and wrote without ceasing or sleeping and finished the novel in three days. Why not? Agatha said that the characters were already there, waiting in the wings, ready to come onto the stage when their cues were called. They came on the run.

Agatha Christie always began with the same writing process. She would decide on the method of the murder. She would pinpoint he murderer. She devised the motive. And finally she allowed the characters to wander into her consciousness, and, of course, those characters, especially the suspects, were given motives, as well. She kept her ideas scribbled down in a notebook, but, alas, Agatha had a bad habit of losing her notebooks.

Her formula, at least for her time, was a successful one. Her novels have sold roughly four billion copies, and her estate claims that her works rank third among the world’s most widely published books – behind only William Shakespeare and the Bible. Her novel, And Then There Were None became her best seller with 100 million copies sold.

These are the insights she has left for writers:

Agatha Christie, during World War II, wrote, she said, the last cases for Hercule Poirot, Curtain, and Jane Marple, Sleeping Murder. The manuscripts were placed in a bank vault and were to be released only after her death. She got tired of waiting, and both novels were released in 1974.

In Curtain, she did what she had wanted to do for a long time. Agatha Christie killed off her insufferable little egomaniac, Hercule Poirot, at Styles. She would have nothing more to do with him. He was the only fictional character to ever have his obituary printed in The New York Times.