An Afternoon With Emily: What’s the mystery in the photograph? 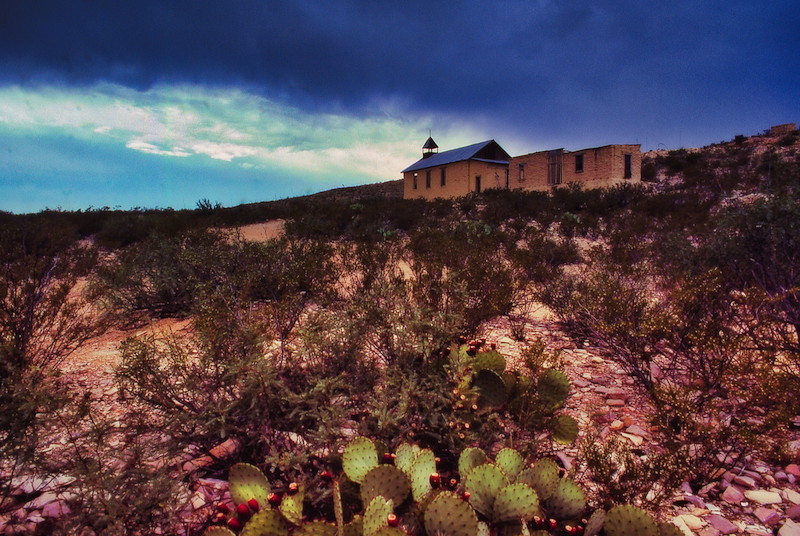 Every story, every piece of art on the wall, every photograph has a mystery. Can you find the mystery in J Gerald Crawford’s image of the Terlingua Church in far West Texas?

Jake came to the church on a Sunday morning when heat was running through the canyons as though it had been blown from the back doors of hell.

He was trapped by harsh desert land.

The creeks were dry.

The mountains were chiseled from rock, their canyons a prison wall.

The lizards had thorns.

His car had shuddered to a stop two hours and eight minutes back down a dirt road.

The motor had coughed one last time.

Only steam was curling up out of the radiator.

Jake figured he had two choices.

He could die of thirst sitting on the hood of his car.

Or he could die walking down the dirt road.

He looked around him.

Only the lizards lived in the desert.

The desert wanted no one else.

The narrow little road had led him to an aging sign on a weathered post that said Terlingua.

An arrow pointed to the left.

He saw a cluster of houses.

They were made from adobe. They were empty. Their floors were dirt.

The winds had blown their roofs away.

He walked to a general store.

At least a sign hanging crookedly above the doorway said that’s what it was.

The one street through town lay on the far side of a cemetery.

Jake walked among the graves.

When the quicksilver mines played out, rocks were all that remained.

Some were lined with veins of quartz.

Jake pushed on the door. It was locked.

He looked through the window. The room was dark.

A web hung on the windowsill. Even the spiders were gone.

On the crest of a hill, atop the boulders, beyond the cactus, sat an old church.

Jake began trudging up the slope and waited for the birds to sing.

Jake saw the old man before he reached the church. He was sitting on a wooden bench, watching the sunlight paint the red slopes and shadows hide the canyons of the mountains.

His hair was white.

His skin was burnished leather.

His jeans were faded, his boots scuffed, the red and white checked shirt missing a button. A straw hat shaded his face.

He hadn’t shaved in a while.

The old man was as lean and as bent as a fence post when he stood.

“Car used up all its water.”

The old man nodded. “Happens a lot out here.”

“When will the general store open?”

“When old Nathan rises from the dead.”

‘He been dead long?”

Jake sat down beside the man. “What do you do for water around here?”

“I may steal one of the buckets.”

The old man grinned. “You wouldn’t be the first.”

Jake’s gaze shifted back to the ruins of downtown Terlingua. “What brought you to this godforsaken little place?” he asked.

“A girl.” The grin turned to a gentle smile. “Name’s Emily. Pretty as a sunset, and I see a lot of sunsets.”

“And you stayed with her.”

The smile on his face widened. “I told you,” the old man repeated. ”Pretty as a sunset.”

“You ever get lonesome? Jake asked.

“And I spend my afternoons with Emily.

Jake shook the old man’s hand and walked away.

Looking for a bucket.

Looking for a creek.

The bucket was easier to find.

Jake was kneeling alongside Terlingua creek when he glanced up and saw the old man leave the church, stumble down the hillside, and wander among the wooden crosses.

A straight-backed chair had been placed beside the grave.

The old man sat down.

Jake would have stopped to say goodbye. but that would have been rude, he decided.

He left with his bucket of water.

He left the old man alone.

He left the old man to spend an afternoon with Emily.

What happened to Emily? That’s the mystery I saw in the image. What mystery do you see?