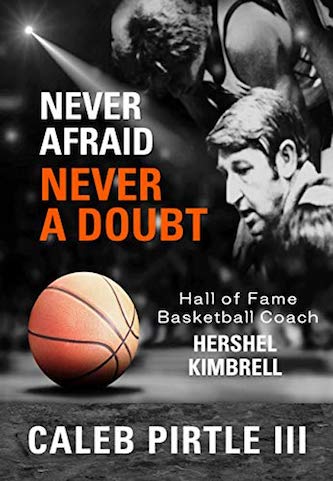 His McMurry University teams beat top-ranked programs because Coach Kimbrell taught his players they were better than they were, and they believed him.

During almost a half-century as a journalist, two sources have kept me informed on what was really going on.

Both proved to be well connected.

So not long ago, they spilled the beans about a book that was in the works.

Book about a basketball coach.

From out Abilene way.

The coach’s McMurry University teams “were mostly too small, too short, and too slow, perhaps, but they were the giant slayers, defeating top-ranked programs for one reason. Coach Kimbrell taught his players they were better than they were, and they believed him.”

Author of the book: Caleb Pirtle III, a Wordsmith Hall of Famer.

Little Singin’ Birdie and Deep Quote know something of the book, Pirtle’s 81st.

Their collective judgment of “Never Afraid Never A Doubt?”

A game-winning, shot-clock beating three-pointer, from the most challenging line-of-sight spot on the court.

Roger Summer is the author of several books including Heart Songs from a Washboard Road. Please click HERE to find his collection of unforgettable short stories on Amazon.