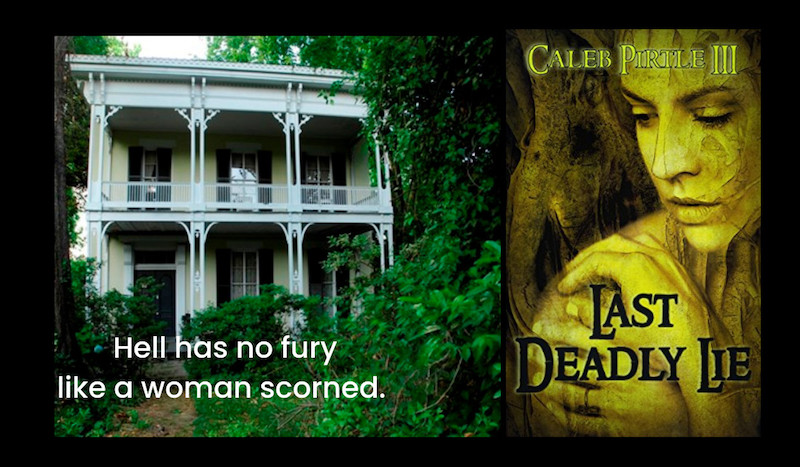 An explosive tale that is dark in mood and filled with corruption, power struggles, overweening pride, and lies, ots of deep, dark, and often desperate, lies.

We tell the best story we can.

And we’re full of wonder.

Wonder if anyone will read it?

Wonder if anyone cares?

This time, author CW Hawes let me know. He wrote a long review as a blog post, and I am forever humbled and grateful for what he had to say about Last Deadly Lie.

Ever since I was a kid, I’ve preferred the series over the standalone book. I read fiction because of the characters, I don’t give two hoots about the plot. Because if the characters are good, they’ll make any plot, or even no plot, work.

Nevertheless, every once in a while I do pick up a standalone novel or story and give it a read.

That’s what happened with Last Deadly Lie by Caleb Pirtle III. I like Mr Pirtle’s writing, the word pictures he draws, and I like his characters. So even though a standalone, I bought a copy of Last Deadly Lie. And I’m glad I did.

The sub-genre of Southern Gothic is uniquely American and is a regionalized version of American Gothic. It is a literary attempt to deal with the issues of Southern culture that continue to this day from the Confederacy’s defeat in the War Between the States (Civil War is a misnomer because the South never wanted to take control of the Federal government, which is what a civil war is all about — they wanted to withdraw and be left alone).

Southern Gothic uses the themes of American Gothic not merely for suspense but to explore the values of the South.

Using the setting of a church and its community in a smallish Southern town, Mr Pirtle gives us an explosive tale that is dark in mood and filled with corruption, power struggles, overweening pride, and lies. Lots of deep, dark, and often desperate, lies.

Last Deadly Lie is a novel that becomes a mirror and forces us to look at ourselves, to take a long, deep, and honest look, and say, But for the grace of God go I. Then, again, maybe we can’t say that. Maybe we all, like those accusers of the woman caught in the very act of adultery, just have to slink away, tossing our stone to the ground.

Mr Pirtle has given us a suspense-filled novel that will keep us up past our bedtimes, forgetting about the baseball game and the vacuum cleaner, and will make us forget our dinners until they get cold.

Last Deadly Lie is one of the best novels I’ve read in a very long time. And that’s due to the life-like characters, placed in real-life situations, and Mr Pirtle’s magical way with words that stimulates the imagination to do what no movie or TV show can.

Seven months into the year and Last Deadly Lie is still the book to beat for my best read of 2021.

Pick up a copy. You won’t be sorry.