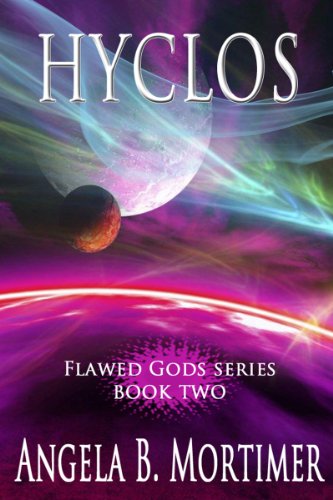 Review: A story that spans the universe and genre, Hyclos will both challenge and entertain you.

In spite of being regarded by her race as a misfit and a rogue, Doella is asked to secretly save her home planet from powerful foes once more. While doing so she receives another gift that has been waiting for her for aeons, guarded by a hidden horror. In saving Varan again, she loses that which she loves most. But she must still fulfill her promise to discover what has happened to the Hyclos.

It is a story that might start on our Earth or it might not, for many Earths have been created by the Varan. The Varan assemble us from whatever genetic material they can find on suitable worlds. They try to make their creatures perfect, but as they themselves are far from perfect, this is rarely achieved. It is even rarer for us to achieve our desires when the Varan withdraw their guidance from us.

One Varan anthropologist cares more than most, and this is her story. Doella is flawed and she knows it. She is a rebel who disagrees with her race’s treatment of humans and their Earths. She feels estranged from her people even when she is surrounded by loving friends and family. Doella is unsure exactly what kind of future she wants for herself, but she has no desire to settle on Varan and forget about the struggling Earth projects in the comfort of her complacent world.

Doella’s destiny is not of her own choosing – nor is it controlled by the creators of her people, despite their attempts to influence her future. They know that she is destined to be the mother of many races, but even they cannot identify the nature of the force that urges their plans for Doella’s future.

The first book introduces us to Doella’s many friends and lovers. We also meet the most unlikely dragon named Wylar (for Doella will become a dragon mother too). Doella realises that Creation is more than just a process begun by the Varan and their originators. The origin of Creation is forgotten, but it will be found … or remembered.

The dragons have a secret too, but they say they have forgotten it Cael, the oldest dragon, still remembers it; and one day Doella will remember it too.

In this, the second book of a four-part series, she finds a home for her family far away from the restrictions of Varan life.
She has yet to encounter evil and goodness in her brood; and later she will discover other individuals who are genetically enhanced like herself. And eventually, she will come to understand that she is the Mother of All.

True to his word, Simune took Doella back to her family, but even here, surrounded by her loved ones, she remained in a grief-stricken half-world, hardly aware of her surroundings. However, this almost complete shutdown of Doella’s mind helped Simune get what he had always wanted. He stayed on to help, telling her family how fond he and Doella were of each other and such good friends, cleverly burying most of the truth so that he actually believed what he was saying.

Psychological professionals gave her time for her grief to dissipate, but when she didn’t recover as she should, they decided that the only way she might be brought out of her deep depression was by reconditioning. However, that would mean losing the Doella they knew forever; her personality changed and many of her memories lost. Simune fought alongside her family to prevent it, and then he suggested a way out. If they married, he was sure that eventually Doella would recover. A child would save her. After all, a Varan mother always put her children first. A child would bring her back. At first they were unsure about Simune’s suggestion, but finally, worn down by his subtle arguments, they were willing to try. Xast and Prirella decided that it might just work, and would bring their daughter back to them, whole and happy again.

Doella and Simune had been married for seven years and had three children. She was not the same Doella as before; she sometimes smiled at the antics of her children, but as much as she loved them, they soon bored her, and she thankfully handed them back to Tira. Tira was Simune’s older sister, and she loved to play with them.

Because of her retiring ways, she had not made any friends, although people were proud that she had had something to do with saving Varan, but Simune was reticent with details. Everyone knew that she used to be bondmate to Takos, and there were rumours of many Earth lovers. She always felt as though Simune’s family was spying on her, willing her to make a wrong move. She was sure that Tira, so pleasant to her on the surface, was reporting all her movements to Simune. She was right. Left alone with her thoughts she would gaze at nothing for hours, her mind empty. She did have one friend though, strangely, her mother-in-law Sicella.

Once Doella had believed that most Varan marriages would be like her parents’ loving, giving and joyous. But she and Simune merely co-existed, his passion undiminished, hers automatic. At first he wasn’t worried about the change in her; how she barely responded when he touched her, how she hardly spoke to anyone. In fact most of the time he was pleased; he had what he wanted after all. And now they had children, she couldn’t leave him. He had been right about one thing; Doella had started to wake up when she felt her first child move inside her.

As for Simune, as the months became years, deep down he was becoming more and more unsure of her, although he wouldn’t admit it, and so he never left her alone for long. Just one night she would have liked to sleep alone with her thoughts, but he seemed afraid to leave her with those thoughts, and every night he made love to her. He was physically satisfied, but hiding from everyone the fact that he was becoming more and more insecure. He knew she didn’t love him and never would – false hopes had led him to marry her before she was recovered enough to know her own mind, just as he had planned so carefully; but in his clever schemes he hadn’t considered that she might never grow to love him. How could she not love him? He had really believed that once they were together, without his rivals, she would finally accept life as his wife.

She tried not to think about the dear friends she had lost, not just because of her own pain, but because if Simune sensed it, he became angry and difficult. Doella was weary of her supposedly perfect Varan existence, which to her was far otherwise.