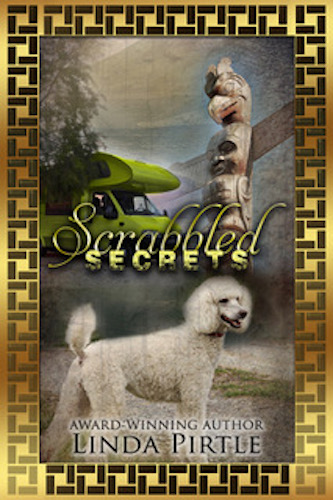 A Cozy Christian Mystery with a kidnapping or two, a daring rescue, and a mad dash with Native Americans helping them every mile of the way through their 19th-century underground railroad.

The easy part is behind her.

Linda Pirtle is finalizing her manuscript for Scrabbled Secrets, the fourth book in her “Games People Play” series.

She’s through with the rewriting.

She’s quit banging her head against the wall after receiving the suggestions, ideas, and corrections sent back from her Beta Readers, N. E. Brown and Patricia LaVigne.

They are authors, too.

They have felt the pain.

Linda has forgiven them.

After all, she was the Beta Reader for N. E. Brown’s upcoming book.

Maybe for Nancy, it was simply payback time.

Linda has her cover from the talented Beti Bup.

And she’s reading the manuscript line by line one last time.

Like most authors, it’s difficult for her to turn the book loose.

“What if I miss something?” she says.

“What if I’ve left a hole or made a mistake that no one caught?” she says.

But by the end of the day, her manuscript for Scrabbled Secrets will be in the hands of the professionals at The Book Khaleesi to format.

Lillian Prestridge is back again

And this time she is joined in the search for justice by Sammie Nightingale, a young Navajo travel photographer who made her debut in Tarot Terrors.

Lillian can’t explain it, but she keeps seeing the ghost of Sammie’s grandfather.

He always shows up on her computer monitor.

He speaks to her.

From the great beyond, he is still trying to protect his granddaughter.

Lillian and Sammie must find her.

She was in a plane crash in Canada.

Sophia’s body was never found in the wreckage.

She was secretly taken to a Canadian rehab facility with two broken arms, and nerve damage in her paralyzed right hand.

And who does she see hiding in the rehab facility?

Her testimony sent him to prison years ago.

Her days are numbered.

Lillian and Sammie have a chance to save her.

But how can she tell them about her plight?

Scrabbled Secrets is a Cozy Christian Mystery with a kidnapping or two, gunshots, a daring rescue, and a mad dash with Native Americans helping them every mile of the way through their generations-old underground railroad.

Can they stay one step and one turn in the road ahead of the mobsters?

The novel will be on Amazon for pre-order in August with a release date in September.

Linda would love to chat with you about Scrabbled Secrets or writing in general. You can contact her at [email protected]