Encounters with the Mysterious Devil Monkeys 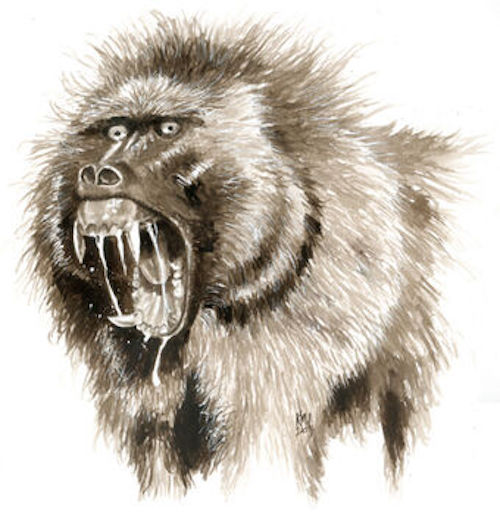 The noises that the beasts emit are described as shrieks, hoots, screams, and whistles.

He was about four feet tall, he walked on all fours.  His fur, gray, was short except around his face, where it was longer like the mane of a lion.  Poised in the headlights of our truck, he was very close, as I remember his eyes being reddish-brown.  He seemed aggressive and threatening and made strange noises.  Oh—and he had the face of a monkey.

This description was given by a woman in the comments section of an article about a strange North American beast.  It is an almost identical description given for creatures known as the Devil Monkeys of Virginia.  There are many accounts of them in the stories of Appalachia.

Another woman, clear off in Washington State relayed her experience in the comments section.  She was riding with her boyfriend on the back roads of The Cascades.  They came upon what seemed to be two large puddles of blood in the road.  They grew anxious and the boyfriend pulled a little off the road into the woods to execute a turn-around.

They wanted out of there.  As the headlights pointed into the woods they focused on a creature very similar to the one just described: four feet tall, glowing eyes.  It was moving, hunched over, and looked like a cross between a primate and a wolf.  When they got back home they did some research and realized that a Devil Monkey was what they had seen.

The article was published in May of 2012.  The first poster indicated that the encounter had happened with her mother in 1990 when they were on a back road at night in the rural Midwest.  The second poster put her comment up in 2015 but did not indicate when she had the encounter.

Sightings of the Devil Monkey are most prevalent in British Columbia and Appalachia, most occurring in rural Virginia.   Modern-day primates do not occur naturally in Canada or the US.  The first documented sighting was in 1959.  A monkey-like creature rushed the automobile of a couple driving in rural Virginia.  They were frightened but escaped.

The descriptions given by witnesses are all similar:  It is a primate-looking beast with a snout like a dog or baboon.  It has sharp, threatening, teeth, pointed ears and a bushy tail.  It is between three and eight feet tall and it moves on all fours, usually jumping.  They are aggressive towards dogs and humans and are thought to feed on livestock.  Livestock always disappear when they are known to be around.  The noises that the beast emits are described as shrieks, hoots, screams, and whistles.

After then 1959 encounter, the next documented encounter was reported by two nurses, going home after a late shift, on a lonely back road.  The Devil Monkey had mostly torn the entire top off the convertible in which they were traveling.

Many reports of encounters have occurred over the years.  There was one recorded as late as 2001:  a giant dark monkey was spotted nine different times in various locations in rural New Hampshire.

Accompanying one of the articles I read, six different people revealed in the comments that they had had a personal encounter.  The first comment I related, the girl with her mother was in Berryman, Missouri when it happened.  Berryman is in the eastern portion of Central Missouri near the Mark Twain National Forest.  It was not far from the county in which I was born.

As I was reading information about Devil Monkeys, I got a slight twinge of uneasiness.  When I was young, the older kids—the ones with cars and the capability to frequent back roads and lovers’ lanes in the moonlight—often filled the heads of us younger ones with tales of apelike creatures they had unpleasant dealings with.

The stories were scary and quite believable—because they were told by so many.  As the years went by I realized how gullible we were.  They loved to see our eyes get big.  They probably had to run off and laugh after they had delivered their nightmarish tales.

Sara Marie Hogg is the author of Quite Curious, a mysterious collection of true stories about the bizarre and unexplained. Please click HERE to find the book on Amazon.