The Fragile Existence of a British Beauty 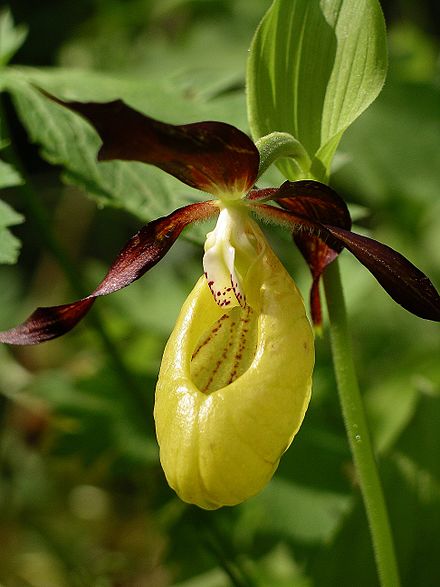 Something pretty for Christmas—this is not often an easy task to write about when my subjects are of the mysterious and oddball variety.  What I am writing about today is beautiful, indeed.  It is both beautiful and extremely wild and rare.

There is an unusual and aggressive installment of police protection going on in Britain to protect it.  It has been so since 1981, by order of the Crown.  The beautiful and precious object has been under a type of armed guard from that day forward.  The guards are preventing a dastardly crime of the vilest nature.

What is it being guarded against?  It is being guarded, at secret locations, against poaching, thievery, damage, sabotage, and harmful influences.  At one time it had faded completely from existence—they thought.  Its population was decimated by ruthless collectors. When a lone beauty was spotted near a forest path in Yorkshire in 1930, the government swooped in to protect it.

Cypripedium calceolus is the Latin name for this rarity—a type of Lady’s Slipper orchid.  Orchidelirium is the very real term for that time in Victorian England when citizens went wild for orchids.  When the single plant was discovered, it was thought to be the last of its kind in the United Kingdom.

All of them had been eradicated from the countryside by poachers. The silly people did not realize that by removing them to other areas, they would kill them.  They require a unique growing environment that cannot be easily duplicated elsewhere.

To steal them is to destroy them. They will only thrive and reproduce in a mysterious mixture of soils.  Strange fungi must be growing nearby—it’s symbiotic.  The protected plant is delicate with crimson and yellow petals that bloom in spring.

Through extreme diligence researchers at Kew Gardens have been able to propagate 700 shoots with 200 blooms and some were introduced at various secret locations throughout England.  Many of them are protected with cages and barriers against wildlife interference.

Orchids purchased in grocery stores have been bred for hardiness.  They are barely related to the beautiful wild specimens.  Wild Lady’s Slippers of several different varieties are found in large quantities in the wildernesses of Europe and America.  England has been barren of them since the mass collections.

That is why Cypripedium calceolus is protected under the UK’s Wildlife and Countryside act of 1981.  Stealing, trading, or bothering these plants in any way is punishable by steep fines and prison terms.

If you should accidentally find yourself on the moors of northern England and witness the following strange scene, it would be best to turn and walk away silently.  You are not supposed to be here:  there he is, a uniformed officer kneeling on the ground, hovering over plant growth with his light.

Without touching the plant, he is checking it for any damage, any change.  He is gathering tiny soil samples for testing.  He is monitoring the soil moisture and surrounding humidity.  His tent is pitched nearby, so he can provide constant security—so he can pounce at the first noisy snapping of a twig in the distance.

Sara Marie Hogg is the author of Curious, Indeed, a collection of true stories about the bizarre and unexplained, Please click HERE to find the book on Amazon.