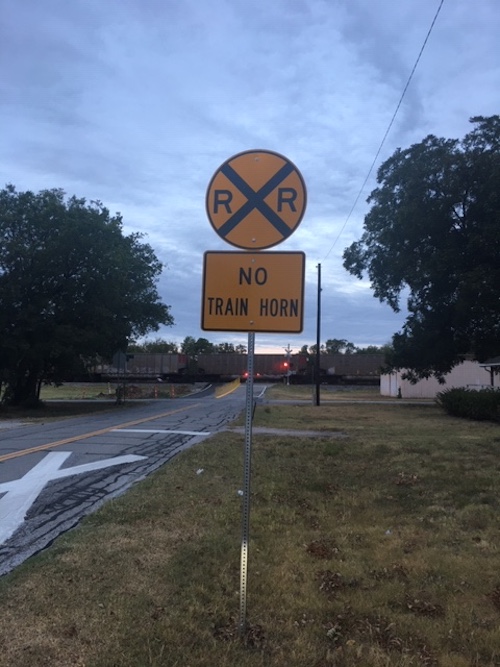 The more advanced degrees one has, the more one realizes –down deep – how much remains unknown.

Ever come across a situation–however minor–that activates curiosity? Responding to minutia I often uncovered in youthful years, my old mother often said, “It don’t amount to a hill of beans.”

Such moments, insignificant as they may have been, are like puppy love. They matter to puppies, and to us as well, particularly when they linger in our minds longer than warranted.  Here’s something I ran across the other day. I’ve waited to share it because it occurred to me that perhaps the project would soon be completed.

I spotted a simple railroad sign.  It was attached to a pole firmly implanted in the ground. The degree of firmness is determined, I suppose, by the designated hole-digger. Upon crossing the track, however, I found no matching sign on the other side…..

I may report it to railroad authorities. It might cause some head-scratching and maybe even throat-clearing, or even face-reddening. If I’m able to reach some of the railroad “higher-ups,” perhaps all three responses might result.

I’m pretty sure I’ve discovered a job half-done, and the perpetrator probably thinks he (or she) has put one over on railway personnel who have reached “on high status.”

The aforementioned sign – on Eldred Street–bears this message: “No Train Horn.” It is planted on the east side of the tracks warning motorists headed west. But what about the poor souls on the other side of the tracks headed east? Don’t they need to know, too?….

The more advanced degrees one has, the more one realizes –down deep – how much remains unknown. Only the hem has been touched.

For example, I know little about railroad “whys and wherefores.” Perhaps prevailing winds in our town would drown out the sounds of a locomotive on the west side of the engine, or that there is more traffic headed west than east. Both possibilities I seriously doubt….

There may be a perfectly good explanation, or at least a flimsy one. I’ll try to think of all the possibilities before I “have my say” to the railroad powers that be.

Maybe the weather turned bad before the other signpost was erected, or maybe the second hole location might have been squarely atop a granite foundation.

I heard once of a physician who extracted a Q-tip from its package around 4:45 p.m. on a Friday. There was no cotton on either end. “Looks to me like this Q-tip got right up against 5 o’clock Friday at the factory,” he laughed….

This perhaps is the most logical of all possibilities. The digger may have been halted by five gongs from the clock. Then, Monday may have come with higher priorities.

Wayda minute! I should have thought of this earlier.

Maybe the single sign erected there drained the final drop of funds from the railroad budget. Perhaps the “matching sign” will come later from the new budget….

Finally, your guess is as good as mine.

There may be simple pride involved if funds are scarce.

During my youth begun during the depression, a frequent reason was given when houses became unsightly. Owners joked that they were “too poor to paint and too proud to whitewash.”…

In the meantime, I urge automobile drivers in our town to maintain vigilance at ALL railroad crossings.

My ever-conservative wife warns me to “look twice in both directions” at RR crossings. Really now, shouldn’t those blinking red lights and downed crossing arms provide ample warning? Come to think of it, I don’t remember previously seeing RR crossing signs that train horns would remain “untooted” at intersections.

It just occurred to me that the sign–like much else in our culture–is fake. Or maybe it was made to adorn the window of a store that usually sells train paraphernalia, but is temporarily out of train horns. That’s it! Blame it on Amazon….