The Little Boy from Mars: Can he save us from a nuclear apocalypse? 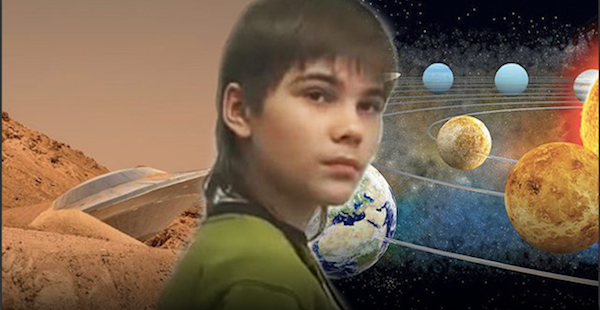 Scientists admit they are perplexed by his otherworldly knowledge.

“I am here to save earth from nuclear apocalypse.  I am not the only one—there are many of us here.”  Such are the words of Boriska (Little Boris) Kiprlyanovich.  Boriska goes on to explain that there are many children of planet Mars that have come to Earth to save it from making the same mistakes Mars made.

How can that be?  As far as we know it is not possible at this time for Mars to sustain human-type life.  That is the catch.  They did not live there in recent times.  They lived there thousands of years ago.  This story has come more than once from the mouth of a Russian child genius.

Boriska, now in his twenties, explains that he and the other children lived thousands of years ago on Mars.  Mars was truly an angry planet—filled with wars.  He and a young friend actually took part in air warfare—raids—then they were reborn on Earth.

Boriska knows he is not the most excellent of artists, but still, he has filled up notebooks with drawings of Mars and the rest of the solar system—what they look like.  The drawings and scribbling are in mind-boggling detail.  It is hard for astro-experts to argue away his revelations.  They are scientifically possible if not probable.

Boriska has always been advanced.  Not only of high intellect, he was able to hold his head up at two weeks of age and was reading and writing at the age of two.  He has unbelievable memory skills.  Scientists admit they are perplexed by his otherworldly knowledge.

Boriska’s Earth birth was in 1996.  According to his parents, he has been taught nothing about outer space.  All of his talk comes from something inside of him.  He is certain that he was a Martian pilot.  He and his friend participated in air raids on that planet.

Boriska has talked of space warfare and alien civilizations since he could talk.  He is shy, but intelligent, and is truly an encyclopedia of space knowledge.  He confirms that thousands of years ago, Mars was destroyed by nuclear warfare.  A few of the beings—who breathe carbon dioxide, by the way—were able to survive.

He and his pilot friend were able to travel through space and time and they had often observed Earth from a weird, triangular spacecraft that is too complex for Boriska to explain.

He adds that there are big secrets for Earthlings to discover in the area of the Great Pyramids, and there are even more important lessons to be found inside the Great Sphinx.  The solution for opening the Sphinx—the main key—can be found near the ear of the Sphinx.  There are things we need to learn, and learn quickly.

The Boy from Mars, as Boriska is often called, may have valuable information for us.  I wonder what his DNA would show.  That thought did pop into my head.  Yet, if he was conceived by and born to Earthling parents he would have Earthling DNA.

According to the, boy, it was his Martian soul that could do the traveling.

Sara Marie Hogg is the author of Curious, Indeed, a collections of true stories about the bizarre and unexplained. Please click HERE to find the book on Amazon.