The mysterious face in the Carolina sandstone 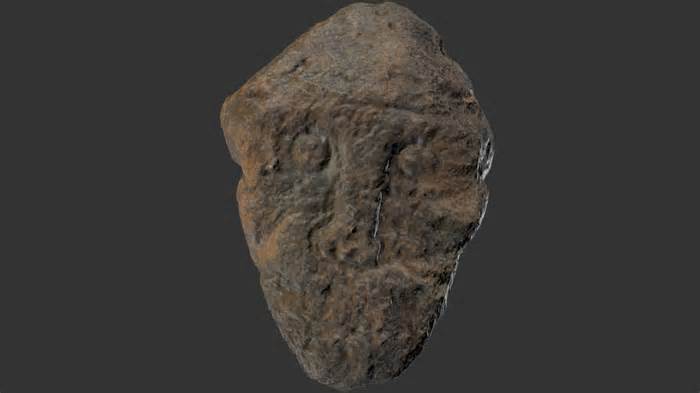 The farmer turned the stone over and discovered it was carved with the face of the most peculiar-looking man.

Here we are.  It is the dog days of summer.  I am too wilted to write down all the convoluted side trips that accompany some of these more perplexing unexplained mysteries.  You may even be too wilted to read one of those.  I am writing one of those, next week, anyway.

Instead, I will write of a mystery that was recently discovered right here in the United States, Samson County North Carolina, to be exact.  Those who are studying the mystery are making appeals to the public to help them solve it.

I am convinced they will solve it in the next year and it will no longer be an unsolved mystery, so I should write about it while it still is one—strike while the iron is hot.  It is my own opinion that it is not very old, but created in the 19th or 20th century, probably.

I hope they prove me wrong because it gives off some very mystical vibes.

A Carolina man named Tom Giddens was out plowing a field when his plow hit a rock.  He did not stare long at the rock, didn’t even turn it over, but placed it off to the side of his work area.  He didn’t think much more about it.

Later he came across it again and gave it a better look.  This time he turned it over.  It was carved with the face of the most peculiar-looking man.

What was it?  He would need some help figuring it out.

Mary Beth Fitts, the assistant archaeologist with the State Department of Archaeology of North Carolina, is as puzzled as Tom.  No one had ever seen anything like it.

Is it Native American?

Is it early American Folk Art?

Is it something rode in ships to America with the first people who came here—something mysterious from another part of the world?  Ireland? Africa? Norse countries?  No one has a clue.

Because Mr. Giddens wants to keep his artifact, Mary Beth Fitts has made a 3-D image on a computer so that it can be studied in great detail.  It can now, also, be sent out on the internet to see if anyone can shed light on this wonderful artifact.

The face sculpture was made of sandstone.  If you played around with sandstone as a kid, you know how soft it is and that it would require no special tools to carve.  That means it could have been made at any time in history.

I have not found any information to tell me if that type of sandstone is widely prevalent in the area in which Tom Giddens discovered it.   That might help to determine if it was made in that area or brought in from elsewhere.

We are posting a picture of the image.  Maybe you or someone else will be able to solve the mystery.

Sara Marie Hogg is the author of Curious, Indeed, a collection of true stories about the bizarre and unexplained, Please click HERE to find the book on Amazon.