A mysterious petrified dinosaur – no bones about it 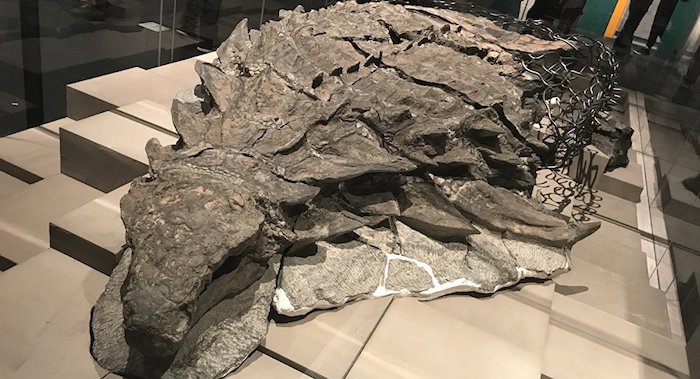 We don’t have a skeleton…we have a dinosaur as it would have been—Caleb  Brown, researcher,  Royal Tyrrell Museum

In 2011, way up north, in Alberta, Canada, a heavy equipment operator was doing his regular job—digging in oil sands at the Millennium Mine north of Fort McMurray.  His excavator regularly carved through the sandy bitumen, without much of interest as it had scraped about, for twelve long years.

Not much to see here but the organic remains of marine animals and plants that had turned into oily residue—they had been living things a mere 110 million years ago.  Infrequently the machine ran into some petrified log or tree stump.

There had never been any bones or skeletons.  When the excavator hit something unfamiliar and hard that day, the operator decided he had better get off his perch and investigate.  What he saw alerted him to call in his supervisor for another opinion.

What were these odd discs in rows surrounded by hard mineral?  Was it ancient tree bark?  Experts were notified and what they had was a miraculous accident of nature.  Careful excavation revealed the complete petrified dinosaur with spiky armored extensions—a nodosaur!

How was it so perfectly preserved?  It was a mummy of sorts.  The circumstances would have had to have been very odd.  It may have been traveling across an ancient landscape when it was swept away by sudden floodwaters, 112 million years ago—mid-Cretaceous.

There was no time for self-preservation.  It floated on its back, dead or dying and this is what is important—it was on its back.  It was buoyant because of built-up gases in the carcass.  The bloated body eventually burst an opening and when the gases were released, it drifted to the bottom of the ocean floor and was swiftly encased in the muddy seabed.  This allowed it to be perfectly preserved as minerals replaced its organic structure.  At one time, that part of Alberta was ocean and coastline with a climate much like the Florida of today.

The specimen, perfectly preserved from snout to hips, was a grouchy herbivore that traveled alone.  The spikes protected it from carnivorous predators, especially the two-foot long spikes of armor that stuck straight out from its shoulders.  The nodosaur did not have a tail club like its armored cousin, the ankylosaur.                              An adult nodosaur was 18 feet long and weighed at least 3000 pounds.

Six years later at the Royal Tyrrell Museum in Alberta’s badlands, much of the work has been done.  The petrified creature had been cleaned up and reassembled in a safe environment.

A cluster of pebble-like masses in the exposed belly of the fossil may be the remains of the dinosaur’s last meal.   The giant is truly a wonder to behold—dragon-like in its mystery and beauty.

Sara Marie Hogg is the author of Curious Indeed, true stories of the bizarre and unexplained, Please click HERE to find the book on Amazon.