The restless and mysterious spirits of Hell’s Gate

Legend has it that the old wooden railroad trestle is a bridge between The Texas Plains and the spirit plane.

Joe Don and Big Sandy had worked up enough moxie to do a little ghost hunting.  What were their chances of making it out alive?  Old timers told them the chances were not good if they went on their mission in the dark of night when The Hunter was on the prowl.  Rumors about the spot had been rampant in the West Texas breeze for decades.   These rumors wildly twirled about, like dust devils looking for a spot to land.

Hell’s Gate—the spot the two twenty-eight-year-old roughnecks had zeroed-in-on for their midnight adventure—was a grim location that was reached by going down a lonely road from the local cemetery.  The curious had been cautioned by the all-knowing:  Only visit Hell’s Gate during daylight hours and take a pack of able-bodied people with you when you go.

What exactly is Hell’s Gate?  It is a massive wooden railroad trestle, constructed in the early 20th Century in Lubbock, Texas.  When the moonlight provides highlights, it does seems to be a giant gate.  Legend has it that the span is a bridge between The Plains and the spirit plane.  Where the Brazos River meanders in West Texas, it branches off into two forks—the Double Mountain Forks.  The trestle spans the North Fork of the trickling river.

The best way to find Hell’s Gate is to first go to Lubbock City Cemetery.  You will need to find the winding road that goes from the cemetery.  It will take you to Hell’s Gate.  If you are already in the cemetery, you can also get to the old trestle by scaling a wrought-iron fence around the graveyard—another portal of entry.  The cemetery, itself is peaceful.  It is over 120 years old and has over 60, 000 graves.  One of the graves is that of Buddy Holly.  Hundreds still visit his memorial spot annually.

The trestle has a more than spooky history.  It is overrun with floating orbs, mysterious shadows, luminescent figures, and eerie noises.  The legends and bad vibes that come off the railroad bridge are due to restless spirits, they say.

There are many.  In early years it was used as a suitable place for vigilantes to lynch people.  The spirits of two little girls have been seen floating around in nearby treetops, one a blonde, and one a brunette.  They still haunt the area after being molested and murdered.   There are the ghosts of others that were tossed off the trestle.

It seems train robbers would often stop the train on the trestle and murder anyone who interfered with their plans.  They would then just toss them off.  A young woman hung herself from the bridge.  There is no real record of this death, but locals know it happened.  She swings there, still.

The most malevolent haunter is an angry entity, The Hunter.  He hovers around the perimeter of the trestle as a constant threat to the curious.  The Hunter is territorial and does what he can to scare intruders away.  He has been very effective.  Was he effective at running off the thrill seekers, Joe Don and Big Sandy?  Did they make it out alive?  The story went cold, like a lot of blood does, when it tries to run at Hell’s Gate.

Well-respected mediums will testify that Lubbock City Cemetery has positive energy.  There is nothing to fear there; the spirits are content.  It is sometimes even a hang-out spot.  If you are searching for dark energy, you must scale the cemetery’s wrought iron fence at night, and seem nosy,  just a little bit too curious—to the restless spirits of Hell’s Gate.

Sara Marie Hogg is the author of Curious Indeed, a collection of strange stories about the unknown and unexplained. Please click HERE to find the book on Amazon. 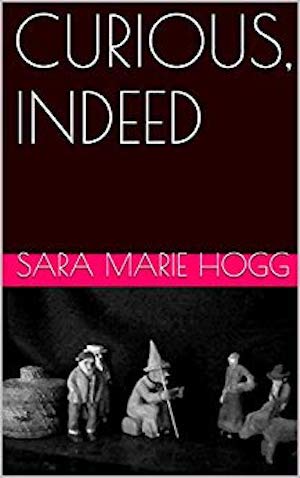