My Review: The Jaystone Inscription by Jeff Russell 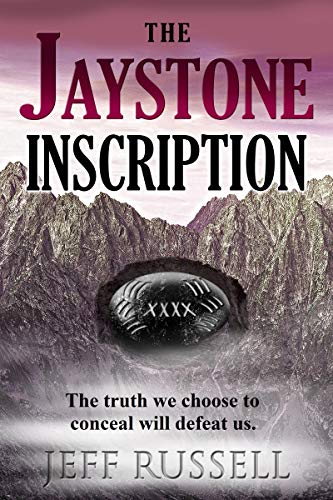 A whirlwind of political intrigue creates one of the most provocative thrillers you will have the pleasure of reading.

It bulged from a ledge in the quarry wall like a giant eye peering through sleepy granite lids. Jason Broadwell stared back, convinced that – whatever it was – it didn’t belong there.

He seeks advice but is edged out of his home and livelihood by a government intent on keeping his discovery a secret.

Angered by the betrayal, he strikes back and is forced into hiding. When the situation escalates out of control, a billion-year-old mystery captures the attention of the world.

Tensions flare and radicals respond with tragic consequences, both across the globe and close to home.

Alone, hungry, and sheltering in the wild with winter fast approaching, Jason concludes that he, as the person who triggered the madness, is the only one who can end it.

With few allies, little money, and a U.S. Marshall closing in, he sets out on that quest knowing the bitter price he’ll pay if he succeeds.

Jason Broadwell is on the mountain, staring at a cliff wall in an old quarry when he makes the most mystifying discovery of his life.

He has no idea what it is.

He has no idea that it will taunt him, threaten him, cast him into a net of political and international intrigue, and perhaps even ruin his life.

Jason has wound up on the one side of the mountain he should have never gone.

Something was embedded in the rock, something exquisite, yet perplexing in an unsettling way.  An object – black and gleaming like a giant eye peering through sleepy granite lids – poked through where a narrow horizontal shelf met the vertical face of the mountain . . .

He sifted through the memories of life in the family quarry and his childhood before then, but nothing he recalled about the history of the land or the mystery of the earth offered an explanation.

I have read all of Jeff Russell’s books, and I know one thing certain from the first sentence he ever placed in a book.

He tells a compelling story.

He is a fine novelist.

His writing is the stuff of poetry.

The language you find in his books is not unlike the orb embedded in rock.

The story surrounding the mysterious object reaches around the globe.

Just what kind of curse has Jason Broadwell unleashed on the world?

And will he live to regret it?

What is the Jaystone inscription?

What secrets does it hold?

Who wants to find it?

Who is willing to kill to possess it?

Why does the government have such a deadly intent to protect it?

And why are radicals willing to die in an effort to take it?

Jeff Russell places you in a whirlwind of political intrigue and conspiracies as he carefully unfolds one layer after another in one of the most provocative and captivating thrillers you will have the pleasure of reading.

A young man’s life will never be the same again.

He may not even survive the madness around him.

Please click HERE to find The Jaystone Inscription on Amazon.