Daily Review: Murder at the Bookstore by Dianne Harman 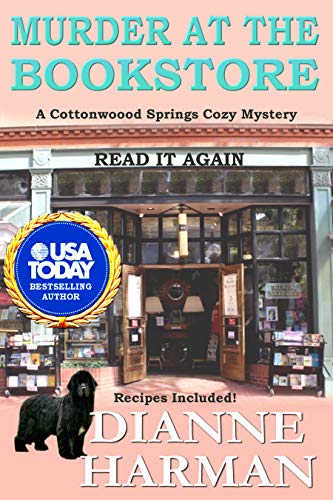 A woman’s dream, a warning, a murder, but it’s the wrong person.

When a mistaken identity murder happens at her sister’s bookstore in Cottonwood Springs, Brigid has no choice. She has to find the person who intended to murder her sister.

Not everyone liked her sister, Fiona. Several people could have done it including the competing bookstore owner, the religious fanatic, the psychic, and her landlady. Now all Brigid has to do is figure out if it was one of them or just a random event.

Sometimes it’s a good thing to have a 125-pound Newfoundland dog for a pet, particularly when the creek runs deep and fast.

This is the third book in the Cottonwood Springs series by two-time USA Today Bestselling Author, Dianne Harman, and one guaranteed to bring a smile to your face and leave a warm feeling in your heart.

So who is this serial killer and why is he killing–will Liz and the FBI agent figure it out in time to stop another murder?

Brandy is instrumental in catching the killer–but it is the boxer who saves Liz’s life!!

Wow! There were a few more twists and turns in this book.

Yes, Holly is still living with Bridgid, Linc and Bridgid are getting really serious, then Fiona hires a part-timer so Holly can focus on her midterms.

Well, Bridgid comes in one day and starts talking, without Fiona answering her and finally gets close and touches her shoulder and finds out it’s not Fiona, but someone who looks just like her sister from the back.

Well, hold on to your shoes! The rest gets really nerve-racking and intense, you will most definitely have to read it to the end to know who did it! Awesome read!

I love these characters. Two sisters, but so different. Brigid, the best sleuth of the two, has taken over care of Holly, a teenager whose mother was murdered (in an earlier book in the series).

She and Holly are making this work and Holly has even learned some sleuthing skills. She and her boyfriend Wade investigated something that happened at their school as the principal wanted to know what student posted a nasty picture of one of the teachers. They figured it out!

Meanwhile, Brigid’s sister Fiona has a major problem at her bookstore. She’s been threatened by at least three people and her new part-time employee has been murdered in the store’s tiny office.

As Brigid concludes, it’s likely because the employee looked like Fiona from the back. In fact, Brigid had mistaken her for Fiona when she arrived to meet Fiona for lunch. When they returned from lunch, the employee was dead and blood was all over.

The two began going through those who might have a grudge against Fiona. And despite the Sheriff’s caution not to get involved in this investigation since it was too close to them, they started contacting the people who had threatened Fiona.

Please click HERE to find Murder at the Bookstore on Amazon.