The Idle American: Smiling Your Way into the Holidays 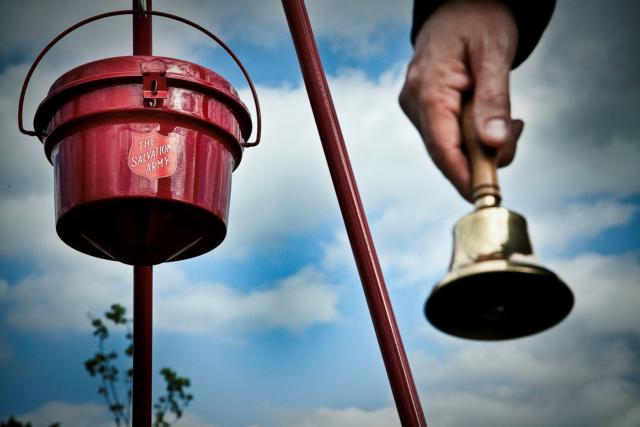 As you celebrate Christmas and face a new year, remember that humor is always the best medicine.

He stood there, gazing at the Salvation Army kettle on the town square. It was Christmas Eve, and my Uncle Mort–106 and counting–solemnly offered a “mental salute” to the woman as she joyfully rang her bell. Frail of body and warmed only by a tattered coat given to the Army last year, she seemed resolved to help the less fortunate.

Perhaps minding the kettle for last-minute shoppers as they joined the fray for final purchases was the noblest thing she could do.

Mort choked up as he described the scene. The kettle-minder’s ringing set him to thinking about moments in 2018 when he blew his stack, usually because he didn’t have all the facts. And when he did, they were somewhat dyslexic–backwards at best in his “fire/aim/ready” life .…

“My mind raced back to this time last year,” Mort confessed. “I was standing in line to exchange gifts that flat-out didn’t work. I felt nearly as sorry for the guy at the returns counter as I did this year for the bell ringer.”

He added that he is often flummoxed simply because he doesn’t understand. As the joke goes, most of his exercise is logged as he jumps to conclusions. With patience, he could avoid most lines….

He was determined to provide me with details on two returns. I could have done well with less information, knowing his tendency is to “dump the whole load.”

“I’m sorry about returning the dental strips,” he sobbed. “I was ugly to the returns guy, fuming that I wore the dental strips for a week, and my teeth were just as crooked as when I first stuck them on. I wish I had read that the label that the strips are for whitening, not straightening.”

I was flabbergasted, but less so than when he cited his second returned item….

“I want my money back for these memory foam shoes,” he ordered.

“I tried ‘em out for three days, taking them off at different places each night,” he explained. “And not once the following mornings did I remember where they were.”

Is any further evidence needed? Little wonder that the tinkling bell reminded him of times in 2018 when he went off “half-cocked.” Truth to tell, he may often have been “quarter-cocked,” or maybe even eighth or sixteenth….

We can make the most of the New Year if we take advice from Denver’s “Healthy Humorist,” Dr. Brad Nieder. He has long proclaimed humor to be the “the best medicine.”

Dr. Nieder, a friend since I emceed his program a half-dozen years ago, gave his stethoscope the “heave ho” in the dawning years of this century. He realized he’d rather practice humor than medicine.

I might first seek medical opinions from practicing physicians, but I’d trust him for “third” opinions, maybe even “seconds.” But, for “humor fixes”–not for medical reasons–I’d trust him more than any other person on the planet….

Described as the “Jerry Seinfeld of Medicine,” he finds humor in the most unlikely places and extracts it from daily experiences. (His website, healthyhumorist.com, provides proof.)

Who among us could find humor in a service station restroom, where management was making genuine efforts to maintain hygiene? Noticing the usual assurances on signs that utmost hygiene is given the highest priority on a scheduled basis, he saw three buttons. Instructions called for him to press the green button if conditions were excellent, the yellow button if acceptable, or the red button if the restroom needed immediate attention.

Here was his chance!  He left this note: “The bathroom was actually quite clean, but there’s no way I’m touching those buttons, which are undoubtedly contaminated with nasty things like staph and gluten.” I think he threw in another germ ID–perhaps salmonella–for good measure. Let’s take deep breaths and relax as we take on 2019….