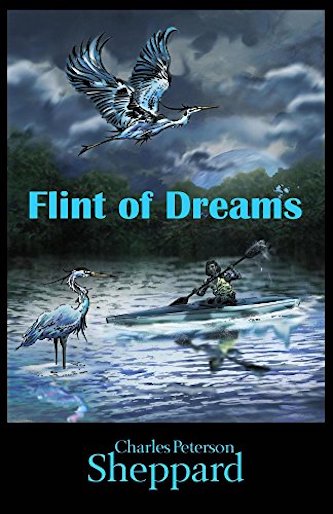 Native American lore runs headlong into the mundane world of crime and the evil of man’s quest for power.

When a young woman is assaulted and two young men murdered on the shores of Hemlock Lake in upstate New York, everybody knew that Asa ‘Flint’ Spencer did it.

He was an angry young Seneca Indian of the Blue Heron Clan with a troubled past. But they were all wrong. And the government researchers seeking remote viewers in the war on terrorism had their eyes on Flint as well.

For Flint was born with special powers he did not fully understand. The secrets lay in the hearts and minds of an old Iroquois woman, a sadistic psychic assassin, and the NSA agents seeking to utilize Flint’s unique abilities at all cost.

For Flint, the missing pieces of the puzzle swirled in his primordial dreams.

C.P. Sheppard creates a world where native American lore runs headlong into the mundane world of crime and the evil of man’s quest for power over others.

Flint Of Dreams chronicles the life and the evolution of spirit of Asa Flint, a young Seneca Iroquois with a jaded past and a hidden destiny that puts his own spirit against that of a powerful and evil opponent.

The story twists and turns its way through the present, the past and the unseen with a frantic energy that builds toward an epic climax that takes place in the spirit world with deadly consequences in the material world.

I highly recommend Flint of Dreams.

Pride is a funny thing.  It can lead people to do great things, but it can also be the force behind many ill-advised actions and decisions.  Foolish and irrational choices will frequently be made in order to sustain one’s elevated sense of ego.  When such feelings are combined with youthful angst and a dismal upbringing, we are left with an individual who truly has the odds stacked against them.

However, even in the most unlikely of circumstances, a reluctant hero may potentially emerge.  This is just such the case with Flint Spencer, the main character in the novel, Flint of Dreams, by Charles Peterson Sheppard.  For those readers who are looking to take a mysterious and spiritual journey, this thriller may be exactly what you are looking for!

Essentially, the novel follows the development of Flint Spencer.  He is a troubled young man of Native American heritage who has spent his life getting into and out of trouble.  From the Seneca Tribe and Blue Heron Clan, Flint has fallen away from his roots.  Until recently he ran with a gang of car thieves and was involved in his fair share of fights.  He is the epitome of someone with a “chip on their shoulder.”

With all of this being considered, it is not a great surprise that he becomes the prime suspect when a young woman is assaulted and two young men are found murdered.  This is far from the truth however as the reality is that a sadistic assassin has been let loose.  To make it even more horrific, this killer has telekinetic and psychic powers which enable him to inflict his havoc in the mind of his victims as well as physically.

Enter the reluctant hero, Flint Spencer!  He has special powers of his own which have tended to appear for him in his dreams.  Nevertheless, he has never fully understood, appreciated or developed these powers.  He actually believes in them about as much as he believes in himself…not much!  Be that as it may, these are truly exceptional abilities and have made him not only the target of the assassin but by government agents as well.  Will Flint finally be able to harness his own spiritual powers and put an end to the mounting chaos and terror?  Or will he become just another notch in the ruthless assassin’s belt?

The plot of the novel is quite thrilling, creative and engaging.  The theme of the importance of believing in yourself permeates throughout the story and has a pivotal role in both plot and character development.  Only by truly coming to terms with his past and origins can Flint begin to accept himself and possibly harness his unique capabilities.

However, this spiritual growth and development are happening concurrently with a path of destruction which is being inflicted by a psychotic killer.  Readers will find themselves on the edge of their seat as they watch this virtual race against time unfold.  The story events are truly imaginative and the pace is electrifying!

While the plot is certainly thrilling, the characters in the novel are engrossing as well.  Flint is obviously the main character and as such develops in the most detail throughout the book.  He is quite believable and identifiable as a hesitant hero who struggles with his own personal demons as he begins to evolve.

There are also a host of other important characters in the story as well.  The narration style used by the author allows them to be thoroughly developed and for the reader to feel empathetic to their individual plights.  Also, Breezy in the role of the main villain is perfect.  He is a cunning and bewitching killer who operates in virtual juxtaposition to Flint.

Overall I found this to be an excellent story.  The only slight issue I had was I would have liked to see more development between Denise and Flint.  The latter part of the novel had a lot to do with Flint’s spiritual journey, and Denise was relegated to a greatly reduced role.  In my opinion, she was quite pivotal in his change.

I would highly recommend this book for adult readers who enjoy a thrilling mystery with a supernatural flavor.  There are some violent scenes so be forewarned!

Please click HERE to find Flint of Dreams on Amazon.