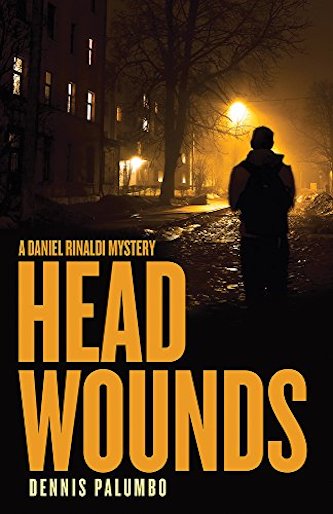 Accomplished writer Dennis Palumbo calls his latest novel Head Wounds and the grim title should serve as a warning.

Psychologist Dr. Daniel Rinaldi consults with the Pittsburgh Police. His specialty is treating victims of violent crime – those who’ve survived an armed robbery, kidnapping, or sexual assault, but whose traumatic experience still haunts them. Head Wounds picks up where Rinaldi’s investigation in Phantom Limb left off, turning the tables on him as he, himself, becomes the target of a vicious killer.

“Miles Davis saved my life.” With these words, Rinaldi becomes a participant in a domestic drama that blows up right outside his front door, saved from a bullet to the brain by pure chance. In the chaos that follows, Rinaldi learns his bad-girl, a wealthy neighbor has told her hair-triggered boyfriend Rinaldi is her lover. As things heat up, Rinaldi becomes a murder suspect.

But this is just the first act in this chilling, edge-of-your-seat thriller. As one savagery follows another, Rinaldi is forced to relive a terrible night that haunts him still. And to realize that now he – and those he loves – are being victimized by a brilliant killer still in the grip of delusion. Determined to destroy Rinaldi by systematically targeting those close to him – his patients, colleagues, and friends – computer genius Sebastian Maddox strives to cause as much psychological pain as possible, before finally orchestrating a bold, macabre death for his quarry.

How ironic. As Pittsburgh morphs from a blue-collar town to a tech giant, a psychopath deploys technology in a murderous way.

Enter two other figures from Rinaldi’s past: retired FBI profiler Lyle Barnes, once a patient who Rinaldi treated for night terrors; and Special Agent Gloria Reese, with whom he falls into a surprising, erotically charged affair. Warned by Maddox not to engage the authorities or else random innocents throughout the city will die, Rinaldi and these two unlikely allies engage in a terrifying cat-and-mouse game with an elusive killer who’ll stop at nothing in pursuit of what he imagines is revenge.

A true page-turner, Head Wounds is the electrifying fifth in a critically acclaimed series of thrillers by Dennis Palumbo. Formerly a Hollywood screenwriter, Dennis Palumbo is now a licensed psychotherapist in private practice.

“In Head Wounds, Dennis Palumbo delivers another remarkable first-person psychological thriller, told through the eyes of besieged Pittsburgh police psychologist Daniel Rinaldi. When Rinaldi’s haunting past takes control of his present, no one in his orbit is safe, and no reader can escape the ever-rising tension as you race to the end.” (Jeffrey Siger, Barry and Lefty-nominated best-selling author of the Andreas Kaldis series)

“Dennis Palumbo’s Daniel Rinaldi books are cerebral thrillers of the first order, with twisting plots, terrifying villains, and a narrative driven by the insight and compassion of the psychologist at the center of it all.” (Timothy Hallinan, author of the Edgar-nominated Poke Rafferty mysteries)

“The Daniel Rinaldi train is rolling…do not miss it!” (Shannon Raab Suspense Magazine)

“The author gets maximum suspense out of the buildup to each killing, taking us along on a child kidnapping and grave robbing until we get to an ending that has something to do with a Warren Zevon song. Yes, it makes a kind of sense, but it’s the compelling craziness of the story that keeps us reading.” (Don Crinklaw Booklist)

“With his exciting Head Wounds, author Dennis Palumbo has written a novel that is as relentlessly scary and involving for the reader as it is for his hero, Dr. Rinaldi. A true thriller.” (, Emmy & Edgar nominated Head Writer/Showrunner of Murder, She Wrote Thomas B. Sawyer, best-selling author of The Adventures of the REAL Tom Sawyer, and several thriller novels)

“Dennis Palumbo always delivers the goods, and Head Wounds is his best yet. From the very first sentence, you know you’re in good hands. Propulsive action and unexpected twists keep you reading way past bedtime. In Daniel Rinaldi, Palumbo has created a hero for our time – as smart as he is tough, and resolutely humane in the face of madness and brutality.” (Sean Chercover, author of The Trinity Game)

“Accomplished writer Dennis Palumbo calls his latest novel Head Wounds and the grim title should serve as a warning. This psychological thriller has some fine language and a strong narrative pull that keeps the pages turning, but the series of crimes that occur are unnerving…People in the story wear Pitt Panthers and Steelers sweatshirts, drive on the parkway, and get their news from KDKA. Mr. Palumbo often does more than just mention Pittsburgh landmarks; he characterizes the city in both positive and negative ways…As Head Wounds rolls to its clever, crazy gothic conclusion, no one could accuse Mr. Palumbo of being flat. This is the fifth book in his Daniel Rinaldi series and most readers will hope Dan lives to see a sixth.” (Pittsburgh Post-Gazette)