The savvy, sexy and often irreverent novels of Bobbi Kornblit

Want to laugh? Want to cry? Bobbi Kornblit takes you into the glamour of Hollywood and down an emotional roller coaster to the day a President died.

Bobbi Kornblit is a spitfire.

And I say that with absolute admiration for the woman and her literary works.

I was recently privileged to hear her speak at the Silver Leos Writers Conference at Texas A&M Commerce.

When Bobbi takes the microphone, she’s in charge.

Bobbi is a naturals storyteller.

Bobbi is a spellbinder.

As she said, authors are often told to write what they know.

Then she went one step further, and it made all the difference in the world. Write what your imagination knows.

If you only read two books this year, these are the ones to wrap your imagination around. 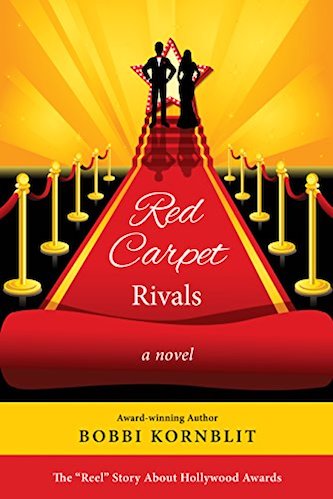 The action in RED CARPET RIVALS swirls around the glamour and chaos of the most celebrated movie awards ceremony. The savvy, sexy, and funny novel provides an inside scoop about the studios and the stars in Hollywood from the 1980s to the present.

The cast of characters jockeys for position on Hollywood’s rocky road to success. Secrets are revealed about their relationships, sexual harassment, health, and blind ambition.

PRESTON “COOP” COOPER and SIRENA JACKSON, an estranged superstar couple, are nominated for their roles in the steamy movie based on a novel by Jack London.

FRANCINE DARTEN, a leading publicist with star clients, wants to handle Coop in public and in private.

The novel has garnered rave reviews:

“RED CARPET RIVALS is to the movies what THE DEVIL WEARS PRADA is to fashion.”
—Mickey Goodman, Author/Journalist

“An absolutely delightful read. Bobbi Kornblit digs into her years as a Hollywood insider and delivers a very funny, irreverent, and mischievously shocking tale of what really goes on behind the scenes in the film industry. Her characters will jump off the page and into your head and heart.”
—Steve Coulter, Actor/Writer, House of Cards & The Walking Dead

“Ever wondered what it was like to walk the red carpet in Hollywood? Get out a glass of champagne because here’s your chance! Bobbi Kornblit gives us an insider view into the glamorous lives of movie studio moguls and actors in her new Red Carpet Rivals. Fast pacing, unexpected plot twists, delicious rivalries, and poignant love stories are all wrapped into a novel that will keep you reading well into the night. Move over, Jackie Collins!”
—Kellie Coates Gilbert, Author of the engaging and popular Sun Valley Series 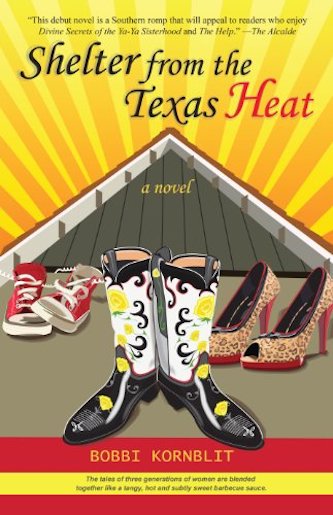 Shelter from the Texas Heat

Through laughter and tears, SHELTER FROM THE TEXAS HEAT tells the story of a woman’s emotional journey on a road that could tragically lead to a dead end or to the highway of happiness.

It has been compared in reviews to The Help and Divine Secrets of the Ya-Ya Sisterhood.

SHELTER FROM THE TEXAS HEAT is a novel about holding onto secrets and the power of friendship to help release them. The tales of three generations of women are blended together like a tangy hot, subtly sweet barbecue sauce.

Rachel Frank, a redheaded Texan, has it all: a successful architect husband, Michael; a house on one of the most prestigious streets in Dallas; and a daughter, Missy — a coed at UT Austin.

And then Rachel’s world turns upside down. Throughout her growth from girlhood in the ’60s to adulthood, she shares her adventures with sidekick and best friend P.J. Rutherford, the daughter of a Texas tycoon.

They experience the horror of John F. Kennedy’s assassination when they hear the news on the playground in Dallas. Rachel’s mother, Rosy Rosenshein Miller, tries to overcome the nightmare of her own past. She’s one of those great “broads” with loads of spunk and a little too much red lipstick.

From funny, turned disastrous moments at a glamorous birthday party at Neiman Marcus, to the painful memories of a Holocaust survivor, SHELTER FROM THE TEXAS HEAT takes the reader on an emotional roller coaster ride that even includes a stop at the State Fair of Texas.

SHELTER FROM THE TEXAS HEAT is generating discussion, with its unique perspective from a child experiencing the tragic event and the effects on her family — and on the nation. Endorsed by the American Library Association’s Booklist Online as one of the 50 best books about JFK (out of 40,000 works of fiction).

Above all, it is a story about friendship and love.